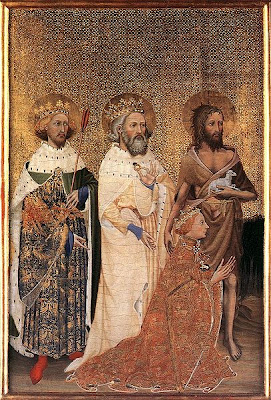 As a follow-up to my post on Father Alexander Lucie-Smith's article on England's forgotten saints, news about a new exhibit at the British Museum: Treasures of Heaven: saints, relics and devotion in medieval europe.

In The Catholic Herald, Archbishop Nichols encouraged Catholics to view the exhibit:

All British Catholics should try to visit the new exhibition of relics and reliquaries at the British Museum in London, Archbishop Vincent Nichols of Westminster has said.

Treasures of Heaven: saints, relics and devotion in medieval Europe opened in the historic Round Reading Room at the museum today.

“I think this is a very, very unique and remarkable exhibition. There are objects here, for example the Mandylion, the face of Christ, which will never leave the Vatican again,” the archbishop said.

“I would just urge Catholics in England and Wales and from further afield to make the effort to come to the British Museum some time between now and October to take up this very unique opportunity. It’s a once-in-a-lifetime, and it’s well worth the journey.”

An on-line acquaintance (William Bence) sent me this article from Standpoint magazine, in which the author, James Hannam, puts the status of relics and reliquaries in England into context (my emphasis added throughout):

The Protestant iconoclasm during the reigns of Henry VIII, Edward VI and Elizabeth I destroyed a substantial proportion of England's medieval inheritance. So the objects on display at the British Museum's summer show Treasures of Heaven appear alien to English sensibilities. Nonetheless, we should not forget that this was once our [English] culture too.

Henry VIII began his reign as a devotee of traditional Catholic piety, even visiting the shrine of the Virgin at Walsingham Abbey in Norfolk. Although he never embraced Protestantism, Henry would later support the suppression of the relic cults and the monasteries that housed many of them. In 1541, the king ordered that all saints' shrines should be destroyed. Their bodies were no longer to be venerated and instead buried in common graves. Soon afterwards, the remains of St Cuthbert at Durham Cathedral were extracted from their beautiful shrine.

Finding the body incorrupt 900 years after the saint had died, the king's agents hesitated [they knew incorruptibility was a sign of sanctity--they had been raised Catholic, after all]. They dumped the corpse in the cloister and sent to London for instructions. Word came back that the shrine should be 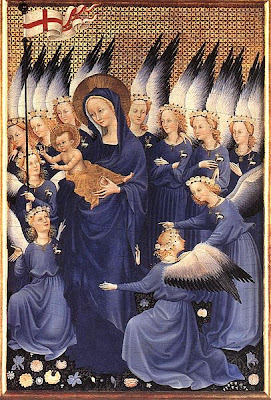 levelled and the saint reburied under the floor of the cathedral in the same spot. By this time, the saint had been exposed to the elements for a few weeks and was incorrupt no longer. The bones were buried as instructed and St Cuthbert remains in his new grave to this day. . . .

The devastation of the Reformation did not end with the shrines of saints. In the reign of Edward VI almost all remaining religious art in the country was lost. A few wall paintings and painted screens survive, but of the images of Christ crucified that were mounted in the chancel of every parish church, not a single one remains. The English destroyed almost their entire artistic tradition and then suppressed their memory of it. Today, medieval alabaster sculptures hold places of honour in museums across Europe and North America, but few of us recognise them as products of the Midlands. A 15th-century example portraying St Thomas Becket's murder is included in the British Museum's show together with various Canterbury pilgrims' accoutrements.

The Treasures of Heaven exhibition is devoted to reliquaries, the bejewelled cases fashioned to hold relics within. The expense and time devoted to crafting these holy boxes gives some indication of how seriously relics were taken. Visitors expecting to see gruesome remains will be disappointed — there is hardly a bone in sight. Most of the relics are discreetly wrapped in cloth and, in any case, they are very small in comparison to the reliquaries built to house them. Instead of grisly bits of cadavers, we are treated to a very fine exhibition of medieval objets d'art. . . .

Today, the Catholic Church has an ambivalent attitude towards relics. They are tolerated as an example of popular piety but have no special theological significance. A few attract continued veneration from the faithful, but this appears quaint to Protestants brought up to treat them as papist superstition. But we should remember that it was only an accident of history [Henry VIII's lack of a legitimate male heir with Queen Katherine of Aragon] that expelled the cult of the saints from England. The strange and foreign objects in the British Museum's exhibition represent customs that were once as English as roast beef and brown ale.

(Images: The Wilton Diptych of King Richard II. Source: wikipedia. More here about the Diptych)
Posted by Stephanie A. Mann at 2:08 AM