The Tyranny of Henry VIII and the Knights of St. John 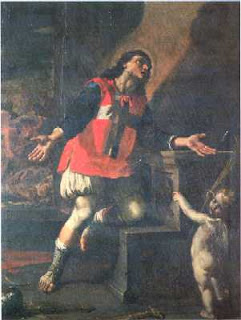 On July 8 or 9 or 10, 1539, Sir Thomas Dingley and Sir Adrian Fortescue, Knights of St. John, were executed by order of Henry VIII. In the common pattern of injustice at the time, they were never tried and were attainted in documents that included Margaret Pole, the Countess of Salisbury (who would be finally executed on May 28, 1541).

Adrian Fortescue had been in very high favor at Henry VIII's Court; his mother was Alice Boleyn, Anne Boleyn's aunt. In the early years of Henry's reign he accompanied his king to Calais and to the Field of the Cloth of Gold. He was made a Knight of the Bath in 1503, along with Henry, then Prince of Wales. Sir Adrian married twice and had four daughters and three sons.

In 1532 he entered the Order of Saint John of Jerusalem, and by the mid 1530's that Order's opposition to Henry VIII's religious policy resulted in suppression of the Order and seizure of its property by the Crown. Knights of the Order were not welcome at Court and were forbidden to wear the habit or badges of their Order. Sir Adrian was imprisoned at Marshalsea, released, and arrested again on February 14, 1539, held in the Tower of London until his execution. He was then attainted and his possessions first cataloged, then seized by the Crown.

The Bill of Attainder contains vague language about his crime, speaking of "sundry treasons". Since the Pole family was the main target of this Bill, including not only the Countess of Salisbury, but also her exiled son Cardinal Reginald Pole and other of his associates, Fortescue's association with the Poles (his son Anthony married Catherine Pole) contributed to his condemnation. [Catherine Pole was Margaret Pole's granddaughter. Catherine's father was Sir Geoffrey Pole, who may have betrayed his brother, Henry Lord Montague--executed on December 9, 1538 with Henry Courtenay, the Marquis of Exeter--and was pardoned by Henry VIII.]

Sir Thomas Dingley was a prior of the Order of Saint John of Jerusalem; he also was attainted and condemned without trial, accused of travelling to foreign courts in the interests of the king's enemies.
The date of their executions is reported variously--July 8, 9, or 10--and their place of burial is not known. Clearly they did not merit the usual "obsequies perform'd" according to the state.
Sir Adrian's eldest son John held posts in the Courts of Elizabeth I and James I; he contributed books owned by Sir Adrian to the Bodleian Library in Oxford. His youngest son, Anthony, was involved in a conspiracy against Elizabeth I in 1561 and was exiled.
The cult of these two martyrs, beatified by Pope Leo XIII in 1895, is honored among the Order of Malta.
I am reading Suzannah Lipscomb's 1536: The Year that Changed Henry VIII. While I am not sure that I accept all of her psychological explanation for changes in Henry VIII's behavior, she does point out that after that crucial year, the king displayed an "increasing tendency not to pursue conviction through due process and common law but through parliamentary attainder and a widening definition of treason" (p. 191). Sir Adrian, a "friend" as Thomas More and Henry Norris once had been, was caught up in the net of attainder (posthumous in More's case) just like sixty-four other people during Henry VIII's reign. No wonder Sir Walter Raleigh called him the perfect image of the tyrant!
Posted by Stephanie A. Mann at 2:08 AM