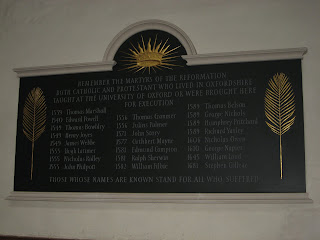 While Blessed John Henry Newman was the Anglican vicar of St. Mary's and Fellow at Oriel in Oxford, he was embroiled in a controversy over the publication of the "Remains" of his late friend Richard Hurrell Froude. Froude's journals and essays contained statements regretting that the Reformation ever happened and extolling certain Catholic devotions to the Blessed Virgin Mary and the Saints. One upshot of this controversy was the campaign to erect a memorial to the Protestant martyrs burned at the stake during the reign of Queen Mary I: Cranmer, Latimer, and Ridley, in 1555 and 1556.

Subscribing to the memorial was a way of rejecting the "Popish" elements of the Oxford Movement. The neo-gothic (?) style Martyrs Memorial stands in the center of St. Giles Street, with a pointed reference to doctrinal and theological disputes between the Church of England and "the Church of Rome":

To the Glory of God, and in grateful commemoration of His servants, Thomas Cranmer, Nicholas Ridley, Hugh Latimer, Prelates of the Church of England, who near this spot yielded their bodies to be burned, bearing witness to the sacred truths which they had affirmed and maintained against the errors of the Church of Rome, and rejoicing that to them it was given not only to believe in Christ, but also to suffer for His sake; this monument was erected by public subscription in the year of our Lord God, MDCCCXLI.

In 1589, Catholic martyrs were executed in Oxford, charged with violating Elizabethan statutes that made it an act of treason to be a Catholic priest in England and a felony to assist a Catholic priest present in England. But it has taken a long time for those martyrs to receive any attention, according to this article: 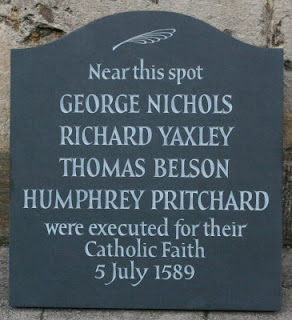 When officials at the university's Merton College agreed in October 2008 to allow the house to be used to commemorate four Catholics executed under Queen Elizabeth I, the move was resisted by some city council members. After more than four centuries, the story of Oxford's martyrs still provokes unease.

"There's no doubting we're in a more ecumenical frame of mind now, and can acknowledge the heroism of those who, whether Protestant or Catholic, died for their beliefs," explained Benedictine Father Bernard Green, an expert on Christian persecution in England and director of studies at Oxford's St. Benet's Hall.

"But there's still, even today, a reluctance here to accept that Catholics like these were genuine martyrs. Although many have been beatified for their witness, the vast majority are still completely unknown," Father Green said.

The reluctance stems from thinking that the Catholic martyrs died because they were breaking the laws that declared them traitors and felons. Those laws were passed because the Elizabethan government 1) wanted uniformity in matter of religion and 2) feared Catholics as plotters against the regime. But not all Catholics plotted against the queen and her rule; most wanted to be loyal to her and practice their Catholic faith peace. So this label of traitor prevents acknowledgement of the martyr's witness, because they were breaking the law. Yet the Marian martyrs were also breaking the heresy laws passed by Parliament during the reign of Mary I, which were a revival of those enforced by Henry VIII, Henry VII, and the Plantagenet kings of York and Lancaster. Cranmer, Ridley, and Latimer were breaking a law passed by the Parliament of England just as much as Southwell, Campion and Walpole, three of the famous Jesuit Recusant martyrs.

More about the four martyrs who suffered on July 5, 1589 here and here. These four martyrs, Bl. George Nichols and Bl. Richard Yaxley, priests, and Bl. Thomas Belson and Bl.Humphrey Pritchard, laymen, suffered during the English reaction to the threat of the Spanish Armada. English Catholics on the whole were not supportive of a Spanish invasion of England, even though it would have meant greater religious freedom. Nonetheless, the English government really cracked down on Catholics in 1588 and 1589--many who had been held in prison were executed, and throughout London new scaffolds and gibbets were set up to demonstrate the treason of Catholics (who had committed no treason except fulfilling their vocations and receiving the Catholic Sacraments).