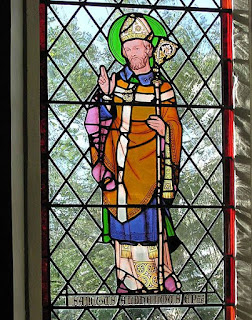 Since tomorrow is the Feast of St. James I've chosen Malmesbury Abbey for today's Sunday shrine post. The saint honored there was St. Aldhelm who wrote about St. James's missionary journeys to Spain. Compostela in Spain is of course the great site of pilgrimage to honor St. James.

Malmesbury Abbey is in Wiltshire England; it was founded as a Benedictine house in 676 A.D. by Aldhelm, a scholar and poet who was a nephew of the king of Wessex, Ine. Until its suppression in 1539 by Henry VIII, it was known as a great site of learning with an excellent library. The 12th century English historian William of Malmesbury was a monk there. He wrote his Gesta Regum Anglorum based on the Venerable Bede's model for historical writing.
The last Abbot of Malmesbury, Robert Selwyn or Frampton, surrendered with 21 monks on December 15, 1539 and they all received generous pensions. The abbey church became the parish church when Henry VIII sold the lands and buildings to one William Stumpe. During the English Civil War both Royalist and Roundhead armies occupied Malmesbury. The parish there now is very open (extremely broad church perhaps?) and well-staffed, according to the website linked above, but only uses part of the abbey complex.

St. Aldhelm was not only the Abbot of Malmesbury but also the first Bishop of Sherborne, a see which was later transferred to Salisbury, from 705 to 709 A.D. He was a poet, a writer of letters, scholarly treastises, and religious instruction. St. Aldhelm is also honored at Salisbury Cathedral.
More and more here.
Malmesbury is also famous for Elmer, the 11th century "Flying Monk"!
Posted by Stephanie A. Mann at 2:05 AM