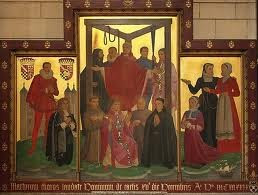 Father Alexander Lucie-Smith writes in The Catholic Herald, "England's saints have been written out of history" (HT to Rich Leonardi!):

England was once a land of saints, but the saints of our isle have been written out of the script by Whiggish historians, which is part of a larger trend still much to the fore today to consign all religious people to the dustbin of history, branding them as part of the forces of reaction and enemies of progress. This is a deeply held but irrational belief: the idea that religion is the source of all our ills, and as such to be excluded from the public sphere, and corralled into the realm of the purely private. . . .

This is not the only mistake that secularism of the modern type assumes. Its other error is to deny the importance of our historical roots; but if we do that we lose contact with reality, for we are historical beings. Catholicism, the religion of the Pope, is the historical faith of these islands, something that Professor Dawkins should take note of; Oxford, where Dawkins teaches, is a historically Catholic university; New College, of which he is a fellow, is dedicated to the Blessed Virgin Mary.

Father Lucie-Smith was writing about the early saints of England like Saint Etheldreda of Ely, whose contributions to the history of England are forgotten. I find it a source of endless irony that those saints, whose relics were destroyed, whose shrines desecrated, and whose memory erased by the iconoclasm of the English Reformation often see a revival when it makes good economic sense today. Many of the Church of England Cathedrals feature reconstructed shrines and facilitate modern pilgrimages, for the sake of the price of a guided tour, a visit to the gift shop and a stop in the tea room!

But it must be the English martyrs of the Reformation era, from 1535 to 1681 that the Whig historian really wants to forget. The example of those martyrs, which I'll be featuring for the next few days, is an embarrassment to the claim that progress proceeded unimpeded, especially since the prophets of progress used medieval methods of torture and execution! These martyrs are much on my mind as I am working on a project to tell their story more systematically than I did in Supremacy and Survival: How Catholics Endured the English Reformation. I couldn't write a book about that event without discussing some of them, but I want to tell more of their stories.
Posted by Stephanie A. Mann at 2:03 AM