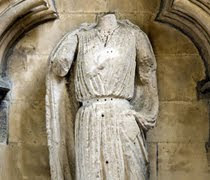 The Winchester Cathedral website includes the image at the left, a statue representing Ecclesia, the Church: "Thought to represent Ecclesia (the Church), this exquisite female statue, with its elegant flowing garments, is a superb example of English 13th-century sculpture. It was dug up from the Cathedral grounds headless, armless and weather beaten, and now graces the Retrochoir at the far end of the Cathedral. " --It obviously would have been destroyed at some point during the English Reformation. After Henry VIII and Thomas Cromwell ordered the destruction of shrines, Edward VI's Protector and Parliament ordered a more complete destruction of saints' images and statues, and those two iconoclastic efforts are evident in Winchester Cathedral, even though many beautiful vestiges of the great medieval abbey church remain or have been restored.

Winchester's fame on the pilgrimage trail was the Shrine of St. Swithun. The website describes the Medieval and Reformation periods thusly:

You can still see the remains of its great monastery, St Swithun’s Priory. These include the 14th-century Pilgrims’ Hall where visitors stayed, and the site of the monks’ dormitory, now a tranquil garden.

Sumptuous works of art were commissioned. A glorious new font celebrating the work of St Nicholas was installed. In the 12th century, a magnificent illuminated Bible was made for the monks to use in their daily worship. You can still see the Winchester Bible in the Cathedral Library.

In the centuries that followed, wealthy and powerful bishops put their stamp on the Norman cathedral. They remodelled it with soaring gothic arches the 14th century, making it even more ornate in the 15th and 16th centuries.

They also commissioned their own chapels, where priests would say daily masses over their tombs to speed their souls into heaven. These fine chantry chapels remain one of the great glories of our Cathedral.

A new Church of England
The dissolution of England’s monasteries during the 1530s under Henry VIII, in his dispute with the Catholic church of Rome, was a catastrophic upheaval. All were swept away. A few, including Winchester, were re-founded as cathedrals.

After nearly 600 years, Winchester’s great Benedictine monastery, St Swithun’s Priory, had come to an end. The shrine of its patron saint was ransacked under cover of darkness, and its cloister demolished.

In the 1550s, Roman Catholicism was briefly revived by Henry’s daughter Mary Tudor, who married her Spanish husband in the Cathedral. But from then on, the reformed Church of England held sway.

It brought with it a new prayer book written in English so all could understand, and a new pattern of worship based on Mattins, Holy Communion and Evensong. These great Anglican services still form the basis of our worship in today.

I think those paragraphs contain an interesting mixture of regret and triumph; sorrow at the material losses of the dissolution of the monasteries and the shrine; yet confidence that something better developed. "Ransacked under the cover of darkness": sounds sneaky and reflects contemporary concern that the people would not be happy with the changes taking place. "A new prayer book written in English so all could understand". Only if all understand English--rather "insular" I think. And what does everyone understand: the words or the mystery of faith? It's difficult to write history in a few short paragraphs, however, I know. Tomorrow's post, remembering Jane Austen (buried in Winchester Cathedral) will provide another example of that difficulty--with a very different solution!
Posted by Stephanie A. Mann at 2:02 AM