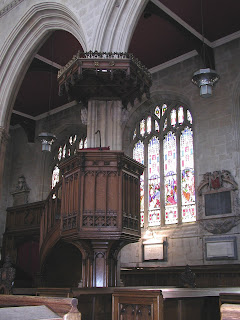 John Henry Newman always dated the beginning of the Oxford Movement from John Keble's sermon in the University Church of St. Mary the Virgin from this date. He preached on the "National Apostacy" urging a renewal of the Church of England. Keble's sermon, focused on the Parliamentary proposal to suppress ten bishoprics in Ireland, expressed the concern that the secular Government had too much control over the Church of England. He was particularly concerned that these Anglican bishops in Catholic Ireland were being treated as mere government officials.

As Keble proclaimed, "Under the guise of charity and tolerance we are come almost to this pass, that no difference, in matters of faith, is to disqualify for our approbation and confidence, whether in public or domestic life. . . . The point really to be considered is, whether, according to the coolest estimate, the fashionable liberality of the generation be not ascribable, in a great measure, to the same tempter which led the Jews voluntarily to set about degrading themselves to a level with the idolatrous Gentiles? And, if it be true anywhere, that such enactments are forced on the Legislature by public opinion, is APOSTASY too hard a word to describe the temper of that nation?"

Keble's outcry inspired first the Hadleigh Conference and then the Tracts for the Times, written by Keble, John Henry Newman, E.B. Pusey of Christ Church, Richard Hurrell Froud, and others. The Tracts were then supplemented, or perhaps even surpassed, by Newman's popular sermons from the pulpit at St. Mary the Virgin, sermons so popular that even the University's rescheduling of the evening meal could not dissuade students from attending. I say that the sermons may have surpassed the Tracts because they presented the content of Christian doctrine so persuasively that they were a demonstrated argument for the apostolic authority of the Church of England. Excerpts from Keble's National Apostasy sermon, the Tracts, Newman's Parochial and Plain Sermons, and other works by members of the Oxford Movement are presented in a volume by Canterbury Press, Firmly I Believe: An Oxford Movement Reader. Ignatius Press offers a one volume collection of Newman's Parochial and Plain Sermons.

Remember that Newman had just been on that trip to Italy and recovered from serious illness: he thought he had been saved by God for some work to do in England--and here it was, fulfilling his desire to serve:

Lead, kindly Light, amid the encircling gloom,
Lead Thou me on!
The night is dark, and I am far from home—
Lead Thou me on!
Keep Thou my feet; I do not ask to see
The distant scene—one step enough for me.

I was not ever thus, nor prayed that
Thou Shouldst lead me on.
I loved to choose and see my path; but now,
Lead Thou me on!
I loved the garish day, and, spite of fears,
Pride ruled my will: remember not past years.

So long Thy power hath blessed me, sure it still
Will lead me on,
O'er moor and fen, o'er crag and torrent, till
The night is gone;
And with the morn those angel faces smile
Which I have loved long since, and lost awhile.

(The picture above is of the pulpit in St. Mary the Virgin, taken on a visit there several years ago.)
Posted by Stephanie A. Mann at 2:08 AM