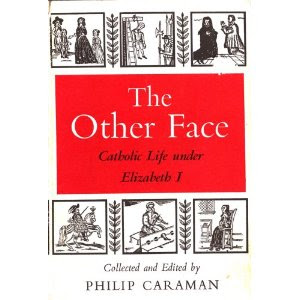 Philip Caraman, SJ was one of the great Catholic historians of the 20th century. He specialized in the study of the Reformation era, producing many books about the martyrs. He served a vice-postulator for the cause of the 40 Martyrs of England and Wales canonized by Pope Paul VI in 1970. He also edited two collections of primary sources (and seems to have planned a third, according to the introduction to the second).

The Other Face: Catholic Life under Elizabeth I and The Years of Siege: Catholic Life from James I to Cromwell are goldmines of eyewitness accounts, letters, court reports, poetry and saints' lives. In the first book, 30 chapters contain excerpts on topics ranging from "The English Nuns", "The New Priests", "Practice and Belief", "At Prayer", and chilling depictions of Prison, Torture, Trial, and The Gallows. Caraman also provides excellent indexes, biographical notes, and sources.

The second book is shorter: 18 chapters contain details about "The Mood of Catholics", "The Catholic Household", Martyrs, Priests, "The Popes and England" and other topics. The same excellent resources are very helpful.

I am very sorry that Father Caraman (evidently) did not complete the next volume, in which he proposed to cover the reigns of Charles II and James II, including the Popish Plot, which he calls "the Oates Conspiracy". I highly recommend them both if you can find used copies or find them in a library.
Posted by Stephanie A. Mann at 2:26 AM