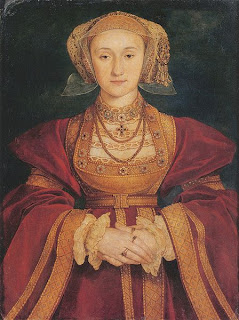 King Henry VIII had his marriage to Anne of Cleves declared null and void on July 9, 1540 in preparation for his fifth marriage, to Katherine Howard. By that time, the Earl of Essex and Lord Great Chamberlain, Thomas Cromwell had been in the Tower of London for about a month. He had been arrested on June 10 at a Council meeting and attainted a traitor in Parliament on June 29. His execution was delayed while Henry worked out the details of the annulment.

At the same time that Henry had been very unhappy with the marriage to Anne of Cleves that Cromwell had urged on him, he had honored Cromwell with those two last titles in April. From granting great honors in April to arresting, attainting and ordering Cromwell's execution on July 28, 1540, and then soon regretting the loss of such a loyal statesman--Henry was reacting very quickly, perhaps out of anger and frustration. He married Katherine Howard the same day Cromwell was beheaded on Tower Hill.

In the meantime, Anne of Cleves survived her six month marriage to Henry VIII very well, materially. She stayed in England with an income of three thousand pounds a year. There was briefly talk that Henry might marry her again when Katherine Howard was executed in 1542, but she remained "the King's sister" until his death.

As I mentioned yesterday, I am reading Suzannah Lipscomb's 1536: The Year that Changed Henry VIII: she posits, as others have, that Henry VIII became a tyrant that year after a series of deaths, accidents, and betrayals. (I will follow up with a review soon.) Thus his paranoia and rage in 1540 over an unfortunate marriage--which led him to remarry and execute Cromwell hastily. Nevertheless, Henry seems to have treated Anne of Cleves well. Lipscomb argues that Henry suffered a crisis of masculinity in 1536 yet he seems to have accepted the loss of face such a failed marital adventure signified--at least as regards the bride. Henry did not find her attractive at all and the wedding night did not go well. The arranger of the marriage certainly suffered, but Anne escaped unscathed! Why?
Posted by Stephanie A. Mann at 2:07 AM