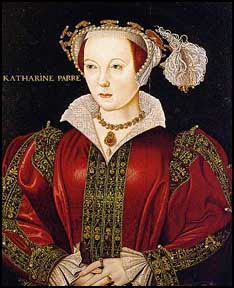 On July 12, 1543, Henry VIII married for the sixth and last time--and his bride was Catherine Parr. This was her third of four marriages, as she married Thomas Seymour after Henry's death in 1547. She had previously been married to Edward Borough and John Neville, Lord Latimer. While married to John Neville she was held hostage in Yorkshire during the Pilgrimage of Grace. His death left her a wealthy widow. Henry VIII noticed her in the household of his daughter Mary. Although she was interested in wedding Thomas Seymour, she thought it prudent to accept the king's proposal!

As Queen Consort of England and Ireland after her marriage to Henry, she served as Regent during his 1544 campaign in France. She certainly helped heal the relationships between Henry and his two daughters, and both of them admired her. To Elizabeth, she was a motherly figure, while to Mary, close to her in age, she was a friend. Henry relied on her for the education of his son and heir.
Catherine had definite evangelical religious leanings. Her book Lamentations of a Sinner reflects her belief in justification by faith alone--it was written after Henry VIII's death. Stephen Gardiner, the Bishop of Winchester attempted to highlight her heretical beliefs to Henry VIII in 1546, almost convincing the king to have her arrested. She convinced him that she discussed religious matters only to distract him from his pain and worries--which might indicate a certain reservation in her dedication to evangelicalism as she was not willing to claim those beliefs and suffer for them. But it was a close call: she might have gone the way of Anne Askew, whom Sir Thomas Wriothesley and Sir Richard Rich tortured in the Tower.
She did not long survive Henry; after his death she married Thomas Seymour, became pregnant, and then died in childbirth. Their marital union was marred by his infatuation with the Princess Elizabeth, whom she had so nurtured and loved.
Linda Porter has written a new biography, due out in paperback this December (which I'll wait for). St. Martin's Press provides an excerpt here.
Posted by Stephanie A. Mann at 2:03 AM