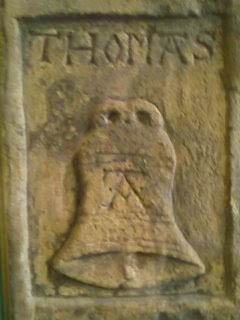 On July 30, 1540, two different sets of martyrs set off for Smithfield for execution. There were three Catholics, who had refused to swear Henry VIII's Oaths of Succession and Supremacy, and there were three Protestants--more properly, Zwinglians--who refused to accept the definition of Christian sacramental doctrine outlined in Henry VIII's Six Articles.

Thomas Abel, Richard Fetherston, and Edward Powell had all been chaplains and defenders of Queen Catherine of Aragon--very learned men; graduates of the University of Oxford. Thomas Abel had written Invicta veritas. An answere, That by no manner of law, it may be lawfull for the most noble King of England, King Henry the eight to be divorced from the queens grace, his lawfull and very wife. B.L. in 1532 and had also been implicated in the Nun of Kent cause celebre. Richard Fetherston had also written against Henry's divorce of Catherine in Contra divortium Henrici et Catharinae, Liber unus although no copy of the text survives. He also tutored the Princess Mary. Henry VIII had favored Edward Powell for his works against Lutheran doctrines in earlier days, but then Powell ran afoul of Henry's changing policies and desires to cast aside Catherine of Aragon.

The Zwinglians Robert Barnes, Thomas Garrett, and William Jerome were also taken to Smithfield that day. Robert Barnes had attended the University of Cambridge and had "hung out" at the White Horse Inn with other Lutheran minded students and masters. While Thomas Cromwell was in power, they had preached against the Catholic Bishop, Stephen Gardiner, but once Cromwell fell and was executed on July 28, 1540, they lost their protector and were sentenced to death.

Both the Catholics and the Zwinglians were sentenced to death without trial. Bills of Attainder condemned the Catholics as Traitors and the Zwinglians as Heretics. Three hurdles dragged the men to Smithfield from the Tower; each hurdle held a traitor and a heretic. At Smithfield, the traitors were hung, cut down and butchered while alive, their bodies quartered and their heads cut for display; the heretics were burnt alive at the stake. A poem titled, "The Metynge of Doctor Barnes and Dr. Powell at Paradise Gate and of theyre communicacion bothe drawen to Smithfylde fro the Towar" described the juxtaposition of the Catholic and the Protestant that day.

This day demonstrates Henry VIII's equal opportunity injustice; he sentenced both those who refused to swear the oaths he demanded and those who refused to obey the religious doctrine he required. The Catholics certainly knew the dangerous route they were taking -- defending Catherine against the king's wishes and refusing the oaths. By 1540, the pattern of execution for those offenses was well established. The Zwinglians were probably caught off guard by Cromwell's sudden fall; on the leading edge of Protestant thinking and theology, they lost their protector and were caught up in the strange factional divisions Henry countenanced in the later years of his reign. (See chapter 2 in Supremacy and Survival, in the section titled, "Thomas Cromwell, Thomas Cranmer, and Henry's Reformation" for more insight into that period.)

Catherine's former chaplains were beatitified by Pope Leo XIII; the Zwinglian preachers were honored by John Foxe in his Acts and Monuments.

(Thomas Abel carved the bell in the wall of his cell in the Tower of London--it is obviously a pun on his last name. What a hallmark of grace under pressure!)
Posted by Stephanie A. Mann at 2:30 AM