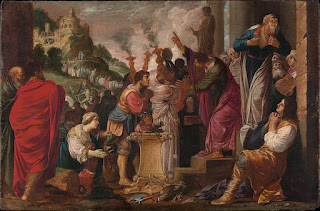 We've rescheduled this interview for Thursday, June 30, at 7:50 am Eastern/6:50 am Central!
UPDATE: Because of the Supreme Court decision on Dobbs, Matt Swaim needs that time slot back on Monday. We'll reschedule later in the week!
Since we celebrate yet another Solemnity next week, that of Saints Peter and Paul, I suggested to Matt Swaim that we take a look at one of Saint John Henry Newman's sermons on Saint Paul during our Monday, June 27 segment on the Son Rise Morning Show. As you know by now, I'll be on the Son Rise Morning Show at my usual time: about 6:50 a.m. Central/7:50 a.m. Eastern time. Please listen live on EWTN Radio.
The sermon I've selected is "St. Paul's Characteristic Gift", based upon the verse, "Gladly therefore will I glory in my infirmities, that the power of Christ may dwell in me." 2 Cor. xii. 9. Newman preached it in the University Church in Dublin on an auspicious day:
I think it a happy circumstance that, in this Church, placed, as it is, under the patronage of the great names of St. Peter and St. Paul, the special feast days of these two Apostles (for such we may account the 29th of June as regards St. Peter, and today as regards St. Paul) should, in the first year of our assembling here, each have fallen on a Sunday. And now that we have arrived, through God's protecting Providence, at the latter of these two days, the Conversion of St. Paul, I do not like to forego the opportunity, with whatever misgivings as to my ability, of offering to you, my Brethren, at least a few remarks upon the wonderful work of God's creative grace mercifully presented to our inspection in the person of this great Apostle. Most unworthy of him, I know, is the best that I can say; and even that {94} best I cannot duly exhibit in the space of time allowed me on an occasion such as this; but what is said out of devotion to him, and for the divine glory, will, I trust, have its use, defective though it be, and be a plea for his favourable notice of those who say it, and be graciously accepted by his and our Lord and Master. 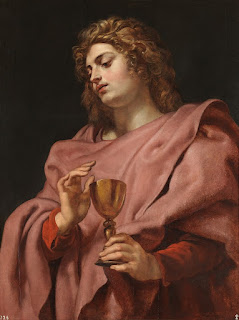 Newman begins the sermon by contrasting two general types of saints: those who seem (like Saint John the Apostle), "to have no part in earth or in human nature; but to think, speak, and act under views, affections, and motives simply supernatural. If they love others, it is simply because they love God, and because man is the object either of His compassion, or of His praise. If they rejoice, it is in what is unseen; if they feel interest, it is in what is unearthly; if they speak, it is almost with the voice of Angels; if they eat or drink, it is almost of Angels' food alone . . ."
He classes Saint Paul among the second group: those in "whom the supernatural combines with nature, instead of superseding it,—invigorating it, elevating it, ennobling it; and who are not the less men, because they are saints. They do not put away their natural endowments, but use them to the glory of the Giver; they do not act beside them, but through them; they do not eclipse them by the brightness of divine grace, but only transfigure them. They are versed in human knowledge; they are busy in human society; they understand the human heart; they can throw themselves into the minds of other men; and all this in consequence of natural gifts and secular education."
Then Newman focuses on that verse in which Saint Paul says that he "glories" in his weakness so that the power of Christ dwells in him:
In him, his human nature, his human affections, his human gifts, were possessed and glorified by a new and heavenly life; they remained; he speaks of them in the text, and in his humility he calls them his infirmity. He was not stripped of nature, but clothed with grace and the power of Christ, and therefore he glories in his infirmity. This is the subject on which I wish to enlarge.

A heathen poet has said, Homo sum, humani nihil a me alienum puto. "I am a man; nothing human is without interest to me:" and the sentiment has been widely and deservedly praised. Now this, in a fulness of meaning which a heathen could not understand, is, I conceive, the characteristic of this great Apostle. He is ever speaking, to use his own words, "human things," and "as a man," and "according to man," and "foolishly":—that is, human nature, the common nature of the whole race of Adam, spoke in him, acted in him, with an energetical presence, with a sort of bodily fulness, always under the sovereign command of divine grace, but {96} losing none of its real freedom and power because of its subordination. And the consequence is, that, having the nature of man so strong within him, he is able to enter into human nature, and to sympathize with it, with a gift peculiarly his own.
Newman notes that Saint Paul sympathized on the one hand with the pagans, the Gentiles to whom he especially preached. Even when they wanted to worship him and Barnabas as though they were Hermes and Zeus, Newman says:
he at once places himself on their level and reckons himself among them, and at the same time speaks of God's love of them, heathens though they were. "Ye men," he cries, "why do ye these things? We also are mortals, men like unto you;" and he adds that God in times past, though suffering all nations to walk in their own ways, "nevertheless left not Himself {99} without testimony, doing good from heaven, giving rains and fruitful seasons, filling our hearts with food and gladness." You see, he says, "our hearts," not "your," as if he were one of those Gentiles; and he dwells in a kindly human way over the food, and the gladness which food causes, which the poor heathen were granted. Hence it is that he is the Apostle who especially insists on our all coming from one father, Adam; for he had pleasure in thinking that all men were brethren. "God hath made," he says, "all mankind of one"; "as in Adam all die, so in Christ all shall be made alive."
But in the same, Newman says, Saint Paul had great empathy for Jews, whom he also wanted to bring to Jesus Christ even though he had a special mission to the Gentiles:
"Hath God cast away His people?" he asks; "God forbid. For I also am an Israelite, of the seed of Abraham, of the tribe of Benjamin." "All are not Israelites that are of Israel." And he dwells upon his confident anticipation of their recovery in time to come. "They are enemies," he says, writing to the Romans, "for your sakes;" that is, you have gained by their loss; "but they are most dear for the sake of the fathers; for the gifts and the calling of God are without repentance." "Blindness in part has happened to Israel, until the fulness of the Gentiles should come in; and so all Israel should be saved."
And one more quotation, in which we see a reminder of Newman's great "Heart Speaks to Heart" motto, and his enduring belief that personal influence is an essential way to bringing others to Christ:
To him specially was it given to preach to the world, who knew the world; he subdued the heart, who understood the heart. It was his sympathy that was his means of influence; it was his affectionateness which was his title and instrument of empire. "I became to the Jews a Jew," he says, "that I might gain the Jews; to them that are under the Law, as if I were under the Law, that I might gain them that were under the Law. To those that were without the Law, as if I were without {104} the Law, that I might gain them that were without the Law. To the weak I became weak, that I might gain the weak. I became all things to all men, that I might save all."
Newman regrets that he can't say more about Saint Paul's characteristic gift because his time for preaching is at an end!
Saint Paul the Apostle, pray for us!
Saint John Henry Newman, pray for us!
Image credit (top): Paul and Barnabas at Lystra – painting by Jacob Pynas (MET, 1971.255) This file was donated to Wikimedia Commons as part of a project by the Metropolitan Museum of Art. Shared under a Creative Commons CC0 1.0 Universal Public Domain Dedication
Image Credit (St John the Apostle by Rubens): public domain
Posted by Stephanie A. Mann at 12:00 AM