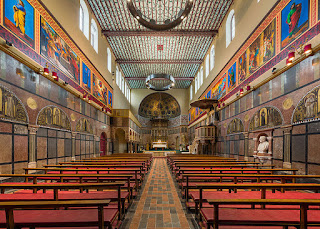 Ireland has produced many saints, and John Henry Newman is the latest. Newman was not Irish, of course, but his canonization is as much an Irish as an English event, an opportunity to reflect on the state of Catholicism in a country where he intermittently spent several years between 1851 and 1858.

Newman’s time in Dublin was unhappy and has been generally reckoned a failure. He was rector of a university that divided the Irish bishops, he thought naively that Oxford could be recreated on St. Stephen’s Green, and he fell out with his patron, Archbishop Paul Cullen. Yet he wrote that his “dear friend” Charles Russell of Maynooth had “more to do” with his conversion “than anyone else.” His university eventually flourished in other hands. He built what is still one of the loveliest churches in Dublin, and his most mature account of higher education, The Idea of a University, was delivered as a series of lectures in the Irish capital. Newman left a mark on Ireland, and Ireland on him.

Newman arrived in Ireland in the middle of one devotional revolution and is being canonized in the middle of another. In 1851, Ireland was rediscovering its Catholic faith. Now, it seems to be losing it. In 1851, the institutional foundations were being laid (Newman’s university among them) for a century and a half of evangelical triumph: churches built, parishes formed, schools opened, seminaries packed, priests ordained, missionaries dispatched, hospitals established, nuns veiled, and rulers at the ready.

Re: Newman's comment about Father Charles Russell of Maynooth: he dedicated Loss and Gain: The Story of a Convert to him. In the Apologia pro Vita Sua, Newman commented on how Father Russell had helped him:

The last letter, which I have inserted [Note 1], is addressed to my dear friend, Dr. Russell, the present President of Maynooth. He had, perhaps, more to do with my conversion than any one else. He called upon me, in passing through Oxford in the summer of 1841, and I think I took him over some of the buildings of the University. He called again another summer, on his way from Dublin to London. I do not recollect that he said a word on the subject of religion on either occasion. He sent me at different times several letters; he was always gentle, mild, unobtrusive, uncontroversial. He let me alone. He also gave me one or two books. Veron's Rule of Faith and some Treatises of the Wallenburghs was one; a volume of St. Alfonso Liguori's Sermons was another; and 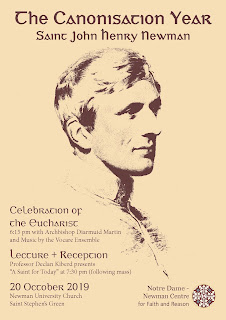 See Section 1 of that chapter at the Newman Reader for the letter.

BTW, the Notre Dame-Newman Centre for Faith and Reason at Newman's University Church, Our Lady, Seat of Wisdom, will celebrate its founder's canonization next Sunday:

Please join us for the first of many events in the year ahead as we celebrate Ireland’s newest saint. Archbishop Diarmuid Martin will preside at our 6:15pm mass on Sunday, 20th October, with uplifting music by the Newman Vocare Ensemble and the Carolan String Quartet. Following the mass, Declan Kiberd will give a talk entitled “A Saint for Today” beginning around 7:30pm. The evening will wrap up with a festive reception in the rear of the church. All are welcome!
Posted by Stephanie A. Mann at 12:00 AM