This Morning: Robert Louis Stevenson versus the Reverend Hyde 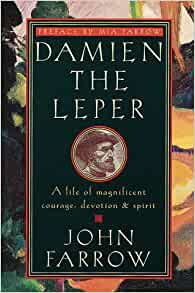 Just a reminder that I'll be on the Son Rise Morning Show this morning to talk about Robert Louis Stevenson's defense of Father Damien de Veuster against an attack in a Presbyterian newspaper by a Reverend Doctor Charles McEwan Hyde in 1889.  I'll be on at my usual time, about 7:50 a.m. Eastern/6:50 a.m. Central. Please listen live here or on your local EWTN affiliate.

Pope Benedict XVI canonized Saint Damien de Veuster along with four other holy men and women in Rome on October 11, 2009. Here are a couple of excerpts from his homily on that occasion:

. . . "Come, follow me". This is the Christian vocation which is born from the Lord's proposal of love and can only be fulfilled in our loving response. Jesus invites his disciples to give their lives completely, without calculation or personal interest, with unreserved trust in God. Saints accept this demanding invitation and set out with humble docility in the following of the Crucified and Risen Christ. Their perfection, in the logic of faith sometimes humanly incomprehensible consists in no longer putting themselves at the centre but in choosing to go against the tide, living in line with the Gospel. This is what the five Saints did who are held up today with great joy for the veneration of the universal Church: Zygmunt Szczęsny Feliński, Francisco Coll y Guitart, Jozef Damien de Veuster, Rafael Arnáiz Barón and Mary of the Cross (Jeanne Jugan). In them we contemplate the Apostle Peter's words fulfilled: "Lo, we have left everything and followed you" (v. 28), and Jesus' comforting reassurance: "there is no one who has left house or brothers or sisters or mother or father or children or lands, for my sake and for the Gospel, who will not receive a hundredfold now in this time... with persecutions, and in the age to come eternal life" (vv. 29-30). . . .

Jozef De Veuster received the name of Damien in the Congregation of the Sacred Hearts of Jesus and Mary. When he was 23 years old, in 1863, he left Flanders, the land of his birth, to proclaim the Gospel on the other side of the world in the Hawaiian Islands. His missionary activity, which gave him such joy, reached its peak in charity. Not without fear and repugnance, he chose to go to the Island of Molokai to serve the lepers who lived there, abandoned by all. Thus he was exposed to the disease from which they suffered. He felt at home with them. The servant of the Word consequently became a suffering servant, a leper with the lepers, for the last four years of his life. In order to follow Christ, Fr Damien not only left his homeland but also risked his health: therefore as the word of Jesus proclaimed to us in today's Gospel says he received eternal life (cf. Mk 10: 30). On this 20th anniversary of the Canonization of another Belgian Saint, Bro. Mutien-Marie, the Church in Belgium has once again come together to give thanks to God for the recognition of one of its sons as an authentic servant of God. Let us remember before this noble figure that it is charity which makes unity, brings it forth and makes it desirable. Following in St Paul's footsteps, St Damien prompts us to choose the good warfare (cf. 1 Tim 1: 18), not the kind that brings division but the kind that gathers people together. He invites us to open our eyes to the forms of leprosy that disfigure the humanity of our brethren and still today call for the charity of our presence as servants, beyond that of our generosity. . . .

Both the U.S. Congress and President Barack Obama commemorated this canonization: Saint Damien de Veuster's statue in the National Statuary Hall Collection in the U.S. Capitol has been there since 1969.
I think that the standard biography is still John Farrow's Damien the Leper. By the way, John Farrow is Mia Farrow's father.
Saint Damien de Veuster, pray for us!
Posted by Stephanie A. Mann at 12:00 AM