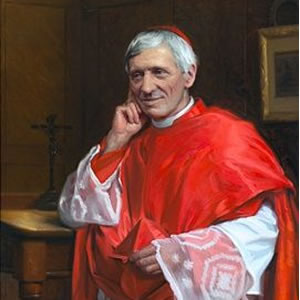 This really is a book of its time: the publisher/editor assumed that everyone knew exactly who the authors were and why each one was qualified to write his or her particular essay. It's also a book in which Cardinal Newman is often mentioned in good standing and fond remembrance.

Published on the 100th anniversary of Catholic Emancipation in England, Catholic Emancipation, 1829 to 1929: Essays by Various Writers with an Introduction by His Eminence Cardinal Bourne (Longmans, Green and Co., London, New York, Toronto, 1929) contains honest and informative analyses of how Catholics in England had succeeded or failed to take advantage of relative religious freedom in England throughout one hundred (100) years.

II. The Catholic Church and the Spiritual Life by The Most Reverend Archbishop [Alban] Goodier, SJ [author of many books including Saints for Sinners] One very lovely line: "When he witnessed, in 1908, the Eucharistic Congress in London, Newman in heaven must indeed have thanked God." p. 43)

IV. The Catholic Church and Literature by Algernon Cecil [author and barrister; author of Six Oxford Thinkers, including Newman]

V. The Catholic Church and Science by Sir Bertram C.A. Windle, FRS, ScD, PhD [most interesting comment: Thomas Huxley was most influential in convincing Englishmen of the conflict between the Church and science]

VI. The Catholic Church and Music by Ernest Oldmeadow

VIII. Catholic and Philanthropy by The Bishop of Brentwood [Arthur Doubleday]

IX. Religious Orders of Men by Abbot [Basil Christopher] Butler [of Downside Abbey; later Auxiliary Bishop of Westminster; born in 1902; died in 1986; he was a participant in and strong proponent of the Second Vatican Council; one of the youngest contributors to this volume]

X. Religious Communities of Women by Maud Monahan [I could not find any dates for her; she translated spiritual works and wrote about Janet Erskine Stuart, superior general of Society of the Sacred Heart]

XI. The Influence of Catholic Laywomen by Miss Margaret Fletcher [1862-1943; she became a Catholic in 1897 and was the founder of the Catholic Women's League]

XII. Statistical Progress of the Catholic Church by Rev. Herbert Thurston, SJ [author of many entries in the Catholic Encyclopedia; interested in Spiritualism and Madame Blavatsky; friend of  Father George Tyrrell, SJ of the Modernist Movement]

and, saving the best for last:

XIII. The Outlook by G.K. Chesterton [just seven (7) years after becoming a Catholic!!]

Perhaps among the most entertaining of the chapters before Chesterton's Outlook is Oldmeadow's analysis of music in Catholic cathedrals and churches (VI). He deplores the long-lasting legacy of the Embassy chapels, which presented many great professional soloists (especially Italian opera singers), thus discouraging the congregation from singing. Oldmeadow encourages instead the use of plainchant, Gregorian or otherwise, and welcomed Pope St. Pius X's 1903 motu proprio Tra le sollecitudini. One of the best passages in his chapter:

Rossini, with his flashy "Stabat Mater", found us an easy prey; and Gounod wound us round his little finger. The show-choirs rose to their showiest; their tenors shook shakes, their leading ladies trilled trills, and a little later on Mendelssohn's "Lauda Sion" was thought to be the most lofty and severe of Church music. Yet there might have been unison singing from every throat and celestial polyphony from a few divinely favored choristers. (p. 135)

Throughout most of the chapters, the constant themes are the patchwork method of repealing penal acts against Catholics, the influx of Irish Immigrants, the influence of French religious and priests (welcomed into England during and after the French Revolution), the growth in schools and colleges, the importance of converts, the development of religious orders (for both men and women), the impact of World War I on how the English viewed Catholics after serving as soldiers, sailors, chaplains, nurses, etc.

When in 1829 Emancipation was at last granted, and Catholic women realised that henceforth they would not form part of the quarry of a slackened hunt, they knew themselves to be in many ways scarred and spent by the long chase; and yet at the same time to be gloriously free. They had acquired a spiritual fortitude and had preserved an inner moral liberty which were not characteristics of English women at the beginning of the nineteenth century. (p. 225)

Although she recounts how English Catholic laywomen rejected some aspects of the international woman's movement, I was never sure what influence they really exerted in England. Fletcher intends to sketch the history of their efforts in meetings and publications but uses so much passive voice that I don't know who did what--perhaps she was too reticent to describe her own activity and achievements. 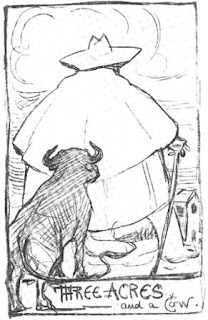 Now to Chesterton's Outlook: he was was the right person to write that chapter: his hopeful innocence and insightful wisdom are evident throughout his contribution:

. . .Whole aspects of Catholic doctrine and tradition, hidden by historical accident and the special quarrels of recent times, will be revealed to the world when it begins to address new questions to the Church. This is a point that has not been sufficiently stressed in the relations between Protestantism and Catholicism. Very often a Protestant was not only a man merely protesting, but a man merely protesting against a particular thing. He sometimes thought that thing was Rome; but it was really only one of the thousand aspects of Rome. When new aspects appear under new searchlights, he will be not so much defeated as simply outside the affair. A Baptist disapproves of baptising babies; a Presbyterian disapproves of bishops; a Prohibitionist disapproves of beer, and so on. But a Presbyterian, as such, has nothing very special to say about the Subconscious Mind. A Baptist as such has nothing special to say to a Behaviorist as such. But a Catholic may have a great deal to say to these people.

For the Catholic commentary on life has gone on so much longer, it has covered so many different social conditions, has dealt so carefully with countless fine shades of metaphysics or casuistry, that it really has a relation to almost any class of speculation that may arise. Thus, in the matter of psychoanalysis and the study of the subconscious, the Church will probably be found sooner or later defending certain essentials about Will and Conscience against a welter of wild impersonality. Catholics remembering Catholicism will have a right and reason to do this. But Calvinists who have half forgotten Calvinism have no particular reason to do it.

There is, for instance, one influence that grows stronger every day, never mentioned in the newspapers, not even intelligible to people in the newspaper frame of mind. It is the return of the Thomist Philosophy; which is the philosophy of common sense, as compared with the paradoxes of Kant and Hegel and the Pragmatists. The Roman religion will be, in the exact sense, the only Rationalistic religion. The other religions will not be Rationalist but Relativist; declaring that the reason is itself relative and unreliable; declaring that Being is only Becoming or that all time is only a time of transition ; saying in mathematics that two and two make five in the fixed stars, saying in metaphysics and in morals that there is a good beyond good and evil. Instead of the materialist who said that the soul did not exist, we shall have the new mystic who says that the body does not exist. Amid all these things the return of the Scholastic will simply be the return of the sane man. (pp. 278-279)

There goes Chesterton, leading the way into the future, pointing out what the Catholic Church will need to offer the civilization and culture of the next hundred years:

But to say that there is no pain, or no matter, or no evil, or no difference between man and beast, or indeed between anything and anything else — this is a desperate effort to destroy all experience and sense of reality; and men will weary of it more and more, when it has ceased to be the latest fashion ; and will look once more for something that will give form to such a chaos and keep the proportions of the mind of man. Millions of men are already at least wondering whether this solution is not to be found in the Catholic order and philosophy.

Above all, the Church has regained that unique position in the world in a fair field and under the very reverse of favour; having had for a hundred years no more than the common right of speaking and publishing and voting in popular assemblies; and as her Master affirmed his divinity by becoming a man among men, she has become for a season a sect among sects, to emerge at the end as something separate or supreme. (p. 281)

As usual, he's almost too right; it's only too bad that we Catholics haven't held on tightly enough to the Common Sense of St. Thomas Aquinas!

I'd say his chapter, Oldmeadow's and Goodier's on the spiritual life of English Catholics are the best in this book of insights, gratitude for the progress made, and acknowledgement of difficulties and even failures.