Preview: May the Fourth Be With You: The Catholic Martyrs of England and Wales 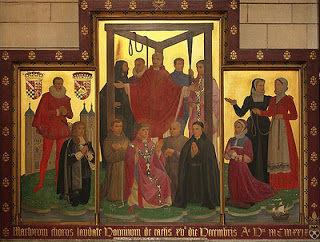 Tomorrow is May 4th, the Feast of the ALL the Catholic Martyrs of England and Wales in dioceses of England and throughout the Anglican Ordinariate. Anna Mitchell has asked me to discuss them on the Son Rise Morning Show tomorrow, at my usual time, 7:50 a.m. Eastern/6:50 a.m. Central. Please listen live here or on your local EWTN affiliate.

When we speak of ALL the Catholic Martyrs of England and Wales, it is a considerable number:

~54 were Beatified on December 29, 1886 by Pope Leo XIII (including Thomas More and John Fisher and 11 others who would later be canonized)

~Pope Leo also declared 30 martyrs Venerable on that date (which is the feast of St. Thomas of Canterbury)

Their feast has been celebrated on May 4 since 2000 since that is the anniversary of the executions of the protomartyrs of the English Reformation under Henry VIII in 1535: The Carthusians John Houghton, Robert Lawrence, and Augustine Webster; the Briggitine Richard Reynolds, and the priest John Haile.

Since I first "appeared" on the Son Rise Morning Show in 2010, we've told the stories of many of these martyrs--Anna Mitchell, Matt Swaim, and I even completed a weekly series on the Forty Martyrs of England and Wales in 2020 to commemorate the 50th anniversary of their canonization! So tomorrow, I thought we'd focus on what these martyrs model for us: their courage, their constancy, and their conversion.

Courage is perhaps almost too obvious: they risked their lives by being true to Jesus and His Church, to the unity of the Church, to the celebration of the Sacraments, and the protection of priests. Since executions, either by burning, beheading, hanging, or hanging, drawing, and quartering were public, they knew the agonies they could or would suffer.

If they faced a court and were condemned, they would hear the judge announce (language alert) what they would suffer: you will be "laid on a hurdle and so drawn to the place of execution, and there to be hanged, cut down alive, your members to be cut off and cast in the fire, your bowels burnt before you, your head smitten off, and your body quartered and divided at the Queen's/King's will, and God have mercy on your soul."

To take two obvious examples, St. John Fisher and St. Thomas More heard those words and returned to their cells in the Tower of London, not knowing that Henry VIII would commute their death sentences to being beheaded, merely, on June 22 and July 6. The martyrs who suffered before them on May 4, 1535 heard those words and then suffered the full torture of that punishment as traitors to Henry VIII. The Carthusians were wearing their habits and St. John Houghton still wore his hair shirt.

Condemned martyrs might have been spared part of the agony of that form of execution if they died by hanging before the evisceration, but they would not know that would happen, so faced agony as they were dragged through the streets to their place of execution; as the first suffered, the others witnessed what they would endure. Executioners could be efficient, or inept like the one who tortured Blessed Hugh Green, unable to locate his heart to cut it out of his chest (August 19, 1642). 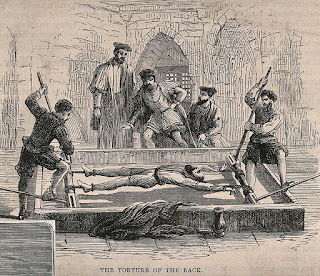 Before their trials and executions, they demonstrated courage through imprisonment and torture, especially during the Elizabethan era: hanging by the wrists, the rack, flogging, and the Scavenger's Daughter. Clamped in irons, kept in the Little Ease, where they neither stand upright or lie down completely--the Tudors especially practiced many forms of torture to break the spirit of the martyrs. St. Robert Southwell's father exhorted Queen Elizabeth I to try, convict, and even execute his son rather than leave him in such filth and darkness.

These English and Welsh martyrs give us a model of constancy: they remained true to their faith through all the dangers and difficulties. Some of the missionary priests returned to England again and again after imprisonment and exile. The missionary priests had to hide, travel constantly while the laity protecting them had to be on constant look out, always aware of their danger. In the midst of all the changes in religion, in doctrine, worship, and devotion occurring all around them, these lay martyrs remained true. They--and many who did not suffer martyrdom--paid the fines, prayed the Rosary of Our Lady, counting on their fingers if it was too dangerous to use beads, made Acts of Perfect Contrition and Spiritual Communions, joined their intentions to Masses celebrated throughout the world; hid their Catholic books, and tried their best to practice the Faith of their Fathers and Mothers. The pressure to conform to the Established Church of England must have been enormous, financially, legally, socially, and within the family: but they were constant.

This might seem contradictory, but they also give us models of conversion; we might also say of contrition and repentance. Unlike the Carthusian priors, all the abbots and priors of the monasteries and priories of England took the oaths Henry VIII demanded: but a few repented and returned to the Faith: the last Abbots of Glastonbury, Colchester and Reading Abbeys finally refused to surrender and dissolve their monasteries and thus suffered martyrdom (beatified by Pope Leo XIII on May 13, 1895). 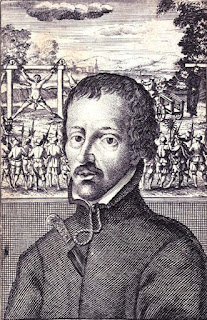 St. Edmund Campion, SJ was a Catholic when Queen Mary visited his neighborhood in London; he was an Anglican when Queen Elizabeth I visited Oxford and he was on his way to a brilliant career in academe and the Church of England. But then reading the Fathers of the Church and talking to others who had returned to the Catholic Church made him pause, leave his career track, and become a Jesuit and then return to England as a priest. When he was martyred on December 1, 1581, another future martyr converted after some of Campion's blood splashed on him, and St. Henry Walpole, SJ left his study of the law, became a Jesuit, and was martyred on April 7, 1595.

Two of the three female saints canonized among the 40 Martyrs of England and Wales, St. Margaret Clitherow and St. Anne Line, were converts. when St. Anne Line, alias Anne Heigham Line  became a Catholic she and her brother William Heigham were disinherited and disowned by their Calvinist father. In 1586 she married Roger Line, another disinherited convert. Not long after their marriage Roger and her brother William were arrested for attending Mass and exiled from England. Roger lived in Flanders and died in 1594.

Left without the financial support Roger had sent her from Flanders, Anne did not return to her father and renounce her Catholic faith; instead she managed a house in London established by Father John Gerard, SJ, as a refuge for Catholic priests, a dangerous occupation. She was arrested on Candlemas, the Feast of the Purification or Presentation on February 2, 1601 after helping the priest Blessed Francis Page, SJ escape arrest. Before she was hanged to death on February 27 that year she proclaimed:

"I am sentenced to die for harbouring a Catholic priest, and so far I am from repenting for having so done, that I wish, with all my soul, that where I have entertained one, I could have entertained a thousand."

She is is a model of all three of these virtues: courage, constancy, and conversion.
Catholic Martyrs of England and Wales, pray for us!
Posted by Stephanie A. Mann at 12:00 AM