St. Bruno of Cologne and the Carthusians in England 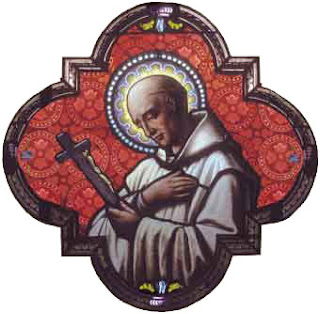 I have often posted about the Carthusian Order and its English Reformation martyrs on this blog. Today we celebrate the feast of the order's founder, St. Bruno of Cologne:
Born in Cologne around 1030, he begins studying at the school of the Cathedral of Reims at an early age. Made a "doctor", Canon of the Cathedral Chapter, he is made the Rector of the University in 1056. He was one of the most remarkable scholars and teacher of his time "a prudent man whose word was rich in meaning."
He finds himself less and less at ease in a city where scandal has little affect towards the clergy and the Bishop himself. After having fought, not without success, against this disorder, Bruno feels the desire of a life more completely given to God alone.
After an attempt at a solitary life of short duration, he enters the region of Grenoble, of which the Bishop, the future Saint Hugues, offers him a solitary site in the mountains of his diocese. In June 1084, the Bishop himself leads Bruno and six of his companions in the primitive valley of Chartreuse, where the Order eventually gets its name from. They build a hermitage, consisting of a few log cabins opening towards a gallery which allows them access to the communal areas of the community -- church, refectory, and chapter room -- without having to suffer too much from intemperate conditions.
After six years of a pleasant solitary life, Bruno is called by Pope Urban II to the service of the Holy See. Not thinking of being able to continue without him, his community first thinks of separating, but it allows itself to be convinced to follow in the life that he first formed. Advisor to the Pope, Bruno is ill at ease a the Pontifical Court. He only lives in Rome for a few short months. With the Pope's blessing, he establishes a new hermitage in the forests of Calabria, in the south of Italy, with a few new companions. There he dies 6 October 1101.

Pope St. John Paul II wrote a message to the "Superior General of the Carthusian Order and to all members of the Carthusian family" in 2001 in celebration of the nine hundredth anniversary of St. Bruno's death:

While the members of the Carthusian family celebrate the ninth centenary of the death of their Founder, with them I give thanks to God who raised up in his Church the eminent and always relevant person, St Bruno. With a fervent prayer, appreciating your witness of fidelity to the See of Peter, I gladly share the joy of the Carthusian Order which has a master of the spiritual life in this "very good and incomparable father". On 6 October 1101, "on fire with divine love", Bruno left "the fleeting shadows of the world" to reach definitively the "eternal delights" (cf. Letter to Ralph, n. 13). The brothers of the Hermitage of Santa Maria della Torre in Calabria, to whom he had given much affection, could not doubt that this dies natalis would have inaugurated a singular spiritual adventure, which still today produces abundant fruit for the Church and for the world.

Bruno was a witness to the cultural and religious upheaval that shook Europe at its dawn and an architect in the reform that the Church wanted to realize in the face of internal difficulties. After having been an esteemed teacher, Bruno felt the call to consecrate himself to the one good that is God himself. "Is there anything so good as God? Is there any other good except God alone? Thus the holy soul that perceives this good, its incomparable brightness, its splendour, its beauty, burns with the flame of heavenly love and cries out: "My soul thirsts for God, for the living God. When shall I come and behold the face of God!'" (Letter to Ralph, n. 15). The radical character of the thirst impelled Bruno, in patient listening to the Spirit, to invent an eremitic lifestyle with his first companions, where everything favours the response to the call of Christ who, in all times, chooses men "to lead them into solitude and unite himself to them in an intimate love" (Statutes of the Carthusian Order). With this choice of "life in the desert" Bruno invited the whole ecclesial community "never to lose sight of the supreme vocation, which is to be always with the Lord" (Vita consecrata, n. 7).

Bruno, who could forget "his" project to answer the requests of the Pope, manifests his lively sense of the Church. Aware that the journey on the way to holiness cannot be conceived without obedience to the Church, he shows us that true life in the following of Christ means putting ourselves in his hands, expressing in self-abandon a surplus of love. He always maintained a similar attitude in joy and constant praise. His brothers noticed that "his face was always radiant with joy and his words modest. With a father's strength, he knew how to show the sensibility of a mother" (Introduction to the funeral parchment dedicated to St Bruno). These delicate words of the funeral parchment express the fruitfulness of a life dedicated to contemplation of the Face of Christ, the source of apostolic efficacy and of fraternal charity. May the sons and daughters of St Bruno, after their father's example, continue untiringly to contemplate Christ, thus mounting "a holy and persevering guard, awaiting the return of their Teacher to open to him as soon as he knocks" (Letter to Ralph, n. 4); this is an encouraging appeal so that all Christians remain vigilant in prayer in order to receive their Lord!

I note this on the website for the Carthusian order, headquartered in Switzerland: "Liturgical celebration does not have any pastoral intent. This explains why those outside the Order are not admitted to participate at the offices or the Mass celebrated in the churches of our monasteries. Because of our call to solitude, visits are limited to the family members of the monk (2 days a year) and to those who feel called to our life, whom we call retreatants."

(Note also how much Thomas Cromwell, Thomas Audley, at al, were interrupting the solitude of the Carthusians as they continued to encourage them to take the required oaths, interrupting their studies and their way of life, constantly intruding upon their retreat from the world.)

Yet as Pope St. John Paul II commented in 2001, that solitude and separation serves the Body of Christ:

How can we doubt for even an instant that a similar expression of pure love can give an extraordinary missionary effectiveness to the Carthusian life? In the withdrawal of monasteries and in the solitude of the cells, patiently and silently, the Carthusians weave the nuptial garment of the Church, "prepared as a bride adorned for her husband" (Apoc 21,2). They present the world to God daily and invite all humanity to the wedding feast of the Lamb. The celebration of the Eucharistic sacrifice is the source and summit of the life in the desert. It conforms to the very being of Christ those who abandon themselves to love, so that they may make visible the Saviour's presence and action in the world, for the salvation of the world and the joy of the Church.
Before their dissolution in 1540 after the martyrdoms of six priors and several monks and brothers, there were nine (9) main Charterhouses. The English Heritage website offers this explanation for their growth in the Medieval era:

In 1346 one of Edward III’s captains in his wars with France, Sir Nicholas de Cantilupe, founded a third charterhouse, at Beauvale in Nottinghamshire. This marked the beginning of a vogue for the order in England. The trauma of the Black Death of 1348–9 and subsequent plagues drew a demoralised population to support the Carthusians, whose piety and devoutness were held in high regard.

In 1371 Sir Walter Mauny, another of Edward III’s captains – encouraged by John Luscote, prior of Hinton – founded the London Charterhouse on the site of a plague cemetery. It became an important focus of piety for well-to-do Londoners, who could endow individual monk’s cells. Other charterhouses soon followed suit – Hull in 1377, Coventry in 1381, Axholme in 1397–8, Mount Grace in 1398, and finally the royal charterhouse of Sheen in 1415.


There is one Charterhouse in England today: St. Hugh at Parkminster. It was founded in 1873 and the house originally had monks from two closed houses from the Continent to accommodate. Their site includes a gift shop, with this book about the Beauvale martyrs of the English Reformation.
Posted by Stephanie A. Mann at 12:30 AM