"Render to God the things that are God's." 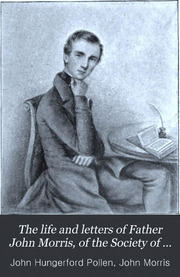 Canon, afterwards Jesuit, F.S.A., b. in India, 4 July, 1826; d. at Wimbledon, 22 Oct., 1893, son of John Carnac Morris, F.R.S. He was educated partly in India, partly at Harrow, partly in reading for Cambridge with Dean Alford, the New Testament scholar. Under him a great change passed over Morris's ideas. Giving up the thought of taking the law as his profession, he became enthusiastic for ecclesiastical antiquities, took a deep interest in the Tractarian movement, and resolved to become an Anglican clergyman. Going up to Trinity College, Cambridge, in October, 1845, he became the friend, and then the pupil of F.A. Paley, grandson of the well-known divine, and already one of the leading Greek scholars of the university.

The conversion of Newman, followed by the receptions of so many others, deeply impressed him, and he was reconciled by Bishop Wareing, 20 May, 1846. A storm followed, beginning in the "Times", which made itself felt even in Parliament. Paley had to leave Cambridge (which led to his subsequently joining the Church), while Morris was practically cast off by his family.

He then went to the English College, Rome, under Dr. Grant, and was there during the revolution of 1848. Soon after the restoration of the English Hierarchy in 1850, he was made Canon of Northampton, and then returned as vice-rector to Rome (1853-1856). He now became postulator for the English Martyrs, whose cause owes perhaps more to him than to any other person. Returning to England, he took part in the third Synod of Westminster, became secretary to Cardinal Wiseman, whom he affectionately nursed on his death-bed, and served under Archbishop Manning, until he became a Jesuit in 1867.

He taught Church History from 1873-1874; he was Rector of St. Ignatius' College, Malta, from 1877-78; master of novices in 1879; and director of the writers of the English Province in 1888. Always remarkable for his ardent affectionate nature, his untiring energy and earnest holiness of life, he was also an excellent scholar, an eloquent speaker, and a high-principled leader of souls.

His death befitted his life; for he expired in the pulpit, uttering the words, "Render to God the things that are God's."

He is buried in the Gap Road Cemetery in Wimbledon.

I say it's appropriate that Pollen wrote about Morris because he had written a book-length biography of his Jesuit colleague, including his letters. Pollen describes the influence of St. John Henry Newman's conversion on Morris in 1845 when he just arrived at Cambridge:

John Morris went up to Cambridge in October, 1845, carrying with him the high expectations which Alford had formed of his future progress, and the proud hopes which his father entertained of his distinguishing himself at the University. His stay there was destined to be brief, though pregnant with important issues. It resulted in a cruel disappointment to his father, while it permanently affected his tutor’s position. As regards himself, it ended in his embracing the true faith, and receiving the further great grace of a vocation to the religious life. Before he had time to settle down in his rooms in the New Court at Trinity, the whole country was talking of John Henry Newman’s reception into the Catholic Church. Thousands of Anglicans besides Morris felt that their own adherence to the body in which they were born might soon become a point for serious consideration, and they set about examining anew the grounds of safety for their own position. In Morris’s case, the Anglican theory of the Church, to which he had hitherto clung, began slowly to lose its force with him. At first, indeed, with inborn loyalty, he tried his best to preserve his confidence in the beliefs which he had so ingenuously accepted. His state of mind at that time reveals itself in a series of letters, which he wrote from Cambridge, to Mr. Ambrose Lisle Phillipps, and which show that he held out as long as he conscientiously could, against the ever deepening conviction, that the Roman Church was after all the one and only Church.

In chapter 8 of that biography, Pollen describes Morris's efforts to promote the causes of the English Catholic martyrs of the Reformation era, beginning with this description of their status before Morris (and he) worked so diligently to document their sufferings:

As Father Morris’s conversion and religious vocation were the most important events, of which we are cognizant in his interior life, so the chief external work of his life is connected with his efforts in behalf of the English Martyrs. In this cause he was engaged for forty years, not continuously indeed, but with interruptions due to the delays of others or to the pressure of conflicting occupations, not to any want of perseverance on his part. Fifty years ago the names and the fame of the splendid line of witnesses to England’s lost Faith were in danger of falling into hopeless oblivion. They had already faded away into mere distant, indistinct memories, the long but inevitable silence of ecclesiastical authority concerning them having given rise to a feeling of uncertainty in the minds of Catholics. If the sufferers had really died for the Faith, why did they not receive the honour due to martyrs? Could it possibly be that there was something more than false accusation in the treason with which they had been charged by their persecutors ? Hence had arisen timidity in speaking and writing of them, a timidity which was natural in those who had so long languished under a cruel proscription, and were now looking for fairer treatment from their former oppressors.

St. John Henry Newman, pray for us!
Holy Catholic Martyrs of England and Wales, pray for us!
Posted by Stephanie A. Mann at 12:00 AM