Nativity of the Blessed Virgin Mary 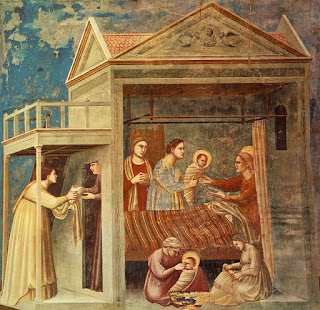 The Most Holy Virgin Mary was born at a time when people had reached such a degree of moral decay that it seemed altogether impossible to restore them. People often said that God must come into the world to restore faith and not permit the ruin of mankind.

The Son of God chose to take on human nature for the salvation of mankind, and chose as His Mother the All-Pure Virgin Mary, who alone was worthy to give birth to the Source of purity and holiness.

The Nativity of Our Most Holy Lady Theotokos and Ever Virgin Mary is celebrated by the Church as a day of universal joy. Within the context of the Old and the New Testaments, the Most Blessed Virgin Mary was born on this radiant day, having been chosen before the ages by Divine Providence to bring about the Mystery of the Incarnation of the Word of God. She is revealed as the Mother of the Savior of the World, Our Lord Jesus Christ.

The feast of the Nativity of the Blessed Virgin Mary, as this University of Dayton post notes, came from the Eastern Church to the West:

The earliest document commemorating this feast comes from the sixth century. It is generally believed that this feast originated in Jerusalem since there is evidence, in the fifth century, of a church dedicated to St. Anne, located north of the Temple in the neighborhood of the Pool of Bethesda. Sofronius, the Patriarch of Jerusalem, affirmed in the year 603 that this was the location of Mary's birth. After the Council of Ephesus in 431 AD, the cult of the Blessed Virgin Mary increased significantly. This, combined with the influence of the Apocrypha, may have been a factor in the increase of popular devotion of the people toward Mary

It is generally believed that the date of September 8 was chosen to celebrate the Nativity of Mary since the civil year began in Constantinople on September 1. Scholars believe that this date was chosen since it was symbolic that the "beginning" of the work of salvation should be commemorated near to the beginning of the new year. The Solemnity of the Immaculate Conception of Mary was later fixed at December 8, nine months prior. This feast day was introduced in Rome from the Eastern Church in the seventh century . The Syro-Sicilian Pope St. Sergius I, who reigned from 687-701, prescribed a litany and procession be part of the liturgical celebration of this feast day. Paschasius Radbertus (d.860) wrote that this feast of Mary's Nativity was being preached throughout the universal church and it became a holy day of obligation for the west by the year 1007.

The primary theme portrayed in the liturgical celebration of this feast day is that the world had been in the darkness of sin and with the arrival of Mary begins a glimmer of light. That light which appears at Mary's holy birth preannounces the arrival of Christ, the Light of the World. Her birth is the beginning of a better world: "Origo mundi melioris." The antiphon for the Canticle of Zechariah at Morning Prayer expressed these sentiments in the following way: "Your birth, O Virgin Mother of God, proclaims joy to the whole world, for from you arose the glorious Sun of Justice, Christ our God; He freed us from the age-old curse and filled us with holiness; he destroyed death and gave us eternal life."

The Catholic Encyclopedia has more detail about the liturgical development of the feast, including the homilies promoting the feast by the 11th century bishop of Chartres, St. Fulbert. As the photo above shows, Giotto included the birth of Mary in his cycle of the Life of the Blessed Virgin in the Scrovegni chapel.
Posted by Stephanie A. Mann at 12:00 AM

Email ThisBlogThis!Share to TwitterShare to FacebookShare to Pinterest
Labels: East and West, Feasts, Nativity of the Blessed Virgin Mary, Sunday, the Theotokos