One of Three Greats: Pope St. Gregory the First 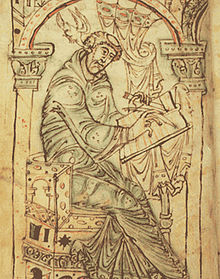 Today is the feast of Pope St. Gregory the Great, born around the year 540 A.D., consecrated Pope on September 3, 590, and died on March 12, 604. Pope Paul VI, in his revision of the Calendar of Saints, moved his feast from the date of his death March 12--when it usually occurs during Lent and thus isn't really celebrated--the usual date chosen for a saint's feast, to this date, on the anniversary of his consecration as Pope. He is both a Father (East and West) and a Doctor (West) of the Church.

He is also honored in the Eastern Orthodox Church, where his feast is celebrated on March 12 with the Divine Liturgy of the Presanctified Gifts, which is attributed to him. In the Catholic Church, we have a somewhat similar Communion Service on Good Friday, when there is no Mass celebrated, but we receive Holy Communion consecrated at and reserved from the Mass of the Lord's Supper on Thursday.

3. Truly wonderful is the work he was able to effect during his reign of little more than thirteen years. He was the restorer of Christian life in its entirety, stimulating the devotion of the faithful, the observance of the monks, the discipline of the clergy, the pastoral solicitude of the bishops. Most prudent father of the family of Christ that he was (Joann. Diac., Vita Greg. ii. 51), he preserved and increased the patrimony of the Church, and liberally succored the impoverished people, Christian society, and individual churches, according to the necessities of each. Becoming truly God's Consul (Epitaph), he pushed his fruitful activity far beyond the walls of Rome, and entirely for the advantage of civilized society. He opposed energetically the unjust claims of the Byzantine Emperors; he checked the audacity and curbed the shameless avarice of the exarchs and the imperial administrators, and stood up in public as the defender of social justice. He tamed the ferocity of the Lombards, and did not hesitate to meet Agulfus at the gates of Rome in order to prevail upon him to raise the siege of the city, just as the Pontiff Leo the Great did in the case of Attila; nor did he desist in his prayers, in his gentle persuasion, in his skillful negotiation, until he saw that dreaded people settle down and adopt a more regular government; until he knew that they were won to the Catholic faith, mainly through the influence of the pious Queen Theodolinda, his daughter in Christ. Hence Gregory may justly be called the savior and liberator of Italy - his own land, as he tenderly calls her. 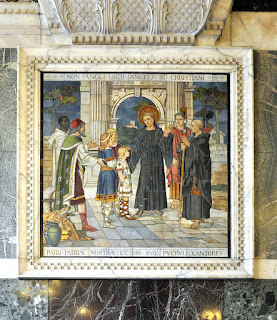 4. Through his incessant pastoral care the embers of heresy in Italy and Africa die out, ecclesiastical life in the Gauls is reorganized, the Visigoths of the Spains are welded together in the conversion which has already been begun among them, and the renowned English nation, which, "situated in a corner of the world, while it had hitherto remained obstinate in the worship of wood and stone" (Reg. viii. 29, 30, ad Eulog. Episcop. Alexandr.), now also receives the true faith of Christ. Gregory's heart overflowed with joy at the news of this precious conquest, for his is the heart of a father embracing his most beloved son, and in attributing all the merit of it to Jesus the Redeemer, "for whose love," as he himself writes, "we are seeking our unknown brethren in Britain, and through whose grace we find unknown ones we were seeking" (Reg. xi. 36 (28), ad Augustin. Anglorum Episcopum). And so grateful to the Holy Pontiff was the English nation that they called him always: our Master, our Doctor, our Apostle, our Pope, our Gregory, and considered itself as the seal of his apostolate. In fine, so salutary and so efficacious was his action that the memory of the works wrought by him became deeply impressed on the minds of posterity, especially during the Middle Ages, which breathed, so to say, the atmosphere infused by him, fed on his words, conformed its life and manners according to the example inculcated by him, with the result that Christian social civilization was happily introduced into the world in opposition to the Roman civilization of the preceding centuries, which now passed away for ever.

Pope Benedict XVI offered two reflections on Pope St. Gregory the Great during his Wednesday audience series on the Fathers of the Church: on May 28, 2008 and June 4, 2008.