Barking Abbey and Its Female Scholars 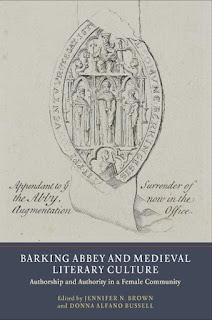 From Eleanor Parker (A Clerk of Oxford) at History Today:

‘It is asked of all who hear this work that they do not revile it because a woman translated it. That is no reason to despise it, nor to disregard the good in it.’ . . .

The work she asks us not to disregard is a narrative of the life of Edward the Confessor, written in Anglo-Norman French (‘the false French of England’, the nun modestly calls it). Its author was an educated woman, able to turn a Latin source into engagingly chatty French verse and Barking Abbey must have been a congenial environment for her. Founded in the seventh century, Barking was one of the foremost nunneries in the country, a wealthy abbey which was home to many well-connected aristocratic and royal women. Its abbesses were frequently appointed from the sisters and daughters of kings and, around the time our nun wrote her Vie d’Edouard le Confesseur, Thomas Becket’s sister Mary – herself a woman of literary interests – was made abbess of Barking in compensation for her brother’s murder.

Across its long history of more than 850 years, Barking Abbey was a centre for women’s learning. It has been described as ‘perhaps the longest-lived ... institutional centre of literary culture for women in British history’ and it had a strong literary and scholarly tradition that spanned the Middle Ages. In the early medieval period, authors such as Aldhelm and Goscelin of St Bertin wrote learned Latin works for the nuns of Barking; later, several nuns composed their own poetry and prose – even their own plays. In the 12th century, when women were increasingly becoming patrons, readers and, in some cases, authors of literary texts, Barking produced more than one talented writer. The first female author in England whose name we know, Clemence of Barking, was a nun there; she wrote an accomplished Life of St Catherine of Alexandria, a saint associated with female learning.
Barking Abbey, according to British History Online, was an important house of women religious and it survived during the Dissolution of the Monasteries until the end of the year 1539:
The abbess of Barking had precedence over other abbesses, and she was one of the four who, holding of the king by barony, were summoned (fn. 60) with the bishops and abbots to do military service under Henry III and Edward I. (fn. 61) The chief officer of the convent was the prioress, and the second the high cellaress. Besides these there were also the kitchener, the under-cellaress, two chantresses, two sub-prioresses and two fratresses. All are mentioned in The Charthe (fn. 62) longynge to the Office of the Celeresse of the Monastery of Barkinge, which treats in great detail of the rents set apart for her, her duties, and the allowances of food and money to be made by her to the nuns, both at ordinary times and at special feasts, anniversaries and seasons. Thirty-seven ladies of the convent were to be provided for at the time when it was drawn up, and of these some were to have a double share. The prioress, high cellaress and kitchener were always among the 'doubles'; and on some occasions also other officers, probably in the order of their rank in the abbey.

No event of importance is recorded in connexion with the dissolution. The net value of the abbey is returned in the Valor as £862 12s. 5½d.; another account (fn. 63) giving this as £862 12s. 5¾d. and the gross value as £1,084 6s. 2¼d. It was third in order of wealth among the nunneries; Sion, a foundation of not much more than a century, coming first, Shaftesbury second, and Wilton fourth. Audeley, the chancellor, writing (fn. 64) to Cromwell in September, 1535, asks that the visitation might be postponed that he might speak about it; but neither the purpose nor the result of his request are known. The abbey was finally surrendered (fn. 65) before Dr. William Petre, the royal commissioner, in the chapter-house, on 14 November, 1539. Twelve days later pensions (fn. 66) were granted to the nuns. The abbess received the large allowance of 200 marks yearly, and smaller sums were assigned to thirty other nuns: Thomasina Jenney, Dorothy Fitzlewes, Agnes Townesend, Margaret Scrowpe, Joan Fyncham, Margery Ballard, Martha Fabyan, Ursula Wentworth, Joan Drurye, Elizabeth Wyott, Agnes Horsey, Suzanna Suliarde, Margaret Cotton, Gabriel Shelton, Margery Paston, Elizabeth Badcok, Agnes Buknam, Katharine Pollard, Anne Snowe, Margaret Bramston, Mary Tyrell, Elizabeth Prist, Audrey Mordaunt, Winifred Mordaunt, Elizabeth Banbrik, Margaret Kempe, Alice Hyde, Lucy Long, Matilda Gravell and Margaret Grenehyll. Most of these, including the abbess, were still living and in receipt of their pensions under Philip and Mary. (fn. 67)

The book cover above is of Barking Abbey and Medieval Literary Culture: Authorship and Authority in a Female Community, Edited by Jennifer N. Brown, Donna Alfano Bussell and published by Boydell & Brewer.
Posted by Stephanie A. Mann at 12:00 AM