Newman and Education: The Idea of a University 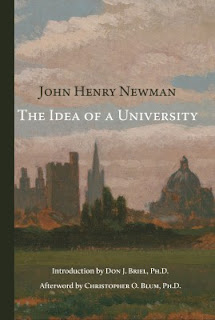 Newman and Education is the theme of our discussion this morning on the Son Rise Morning Show (7:50 a.m Eastern.6:50 a.m. Central). Anna Mitchell and I will continue our Santo Subito! series leading up to Blessed John Henry Newman's canonization later this year (perhaps in October?). Please listen live here.

These introductory paragraphs from a Cardinal Newman Society post summarize Newman's educational career very well, since they are written by Father Ian Ker, who wrote a great biography of Newman:

In 1863, sixty-two-year-old John Henry Newman wrote, “from first to last, education … has been my line.” His career at Oxford had begun with his election in 1822 to a fellowship at Oriel College, “at that time the object of ambition of all rising men in Oxford.” After that he “never wished any thing better or higher than … ‘to live and die a fellow of Oriel.’”[1] In fact, the Oxford or Tractarian Movement might never have begun but for Newman’s dispute with the Provost of Oriel over the role of a college tutor, Newman wanting, as a pioneer of the Oxford tutorial system that was to develop later, a more direct, personal teaching relationship with undergraduates. As a result of being deprived of his tutorship, his teaching career at Oxford—in which his “heart was wrapped up”—came to an end, and he turned to research into the Church Fathers and the history of the early Church. After becoming a Catholic, he was opposed to the restoration of the English hierarchy on the ground that “we want seminaries far more than sees. We want education.”[2]

So when the chance came of helping to found the Catholic University of Ireland in Dublin, he jumped at it, since he had “from the very first month of my Catholic existence … wished for a Catholic University.” Later, he was naturally attracted by the idea of founding the Oratory School in Birmingham; as an educational work, it fell “under those objects, to which I have especially given my time and thought.” And as an old man of sixty-three, he so enjoyed filling in for an absent teacher that he declared that, “if I could believe it to be God’s will, [I] would turn away my thoughts from ever writing any thing, and should see, in the superintendence of these boys, the nearest return to my Oxford life.” He was proud to claim that the school had “led the way in a system of educational improvement on a large scale through the Catholic community.”[3]

Newman's foundation of the Catholic University of Ireland and the discourses he presented in Dublin to describe the kind of educational experience he wanted to develop there resulted in The Idea of a University, one of his greatest works. He envisions--because he had experienced it at Oxford--a university as a place of universal knowledge.

He believed it was a community of scholars and students: the idea of community was important to him and the image some present of Newman as a reclusive scholar in an ivory tower is false. He thought that students helped each other learn, understand concepts, apply their knowledge, etc. He thought the tutors and teachers in the university community benefited from living in community too.

He believed a university taught more than knowledge as points of data: it taught students how to think, how to learn about something, how to apply the skills of research and understanding to any subject they encountered. He called this a cultivation of mind that gave the students a connected view of all things, a philosophical method for understanding and progressing in knowledge.

He believed a university had to teach Theology: Theology is a body of knowledge that must be included in the curriculum of a university--not comparative religion, not religious studies, not the Bible as literature, not the culture of religion, etc--as a subject with a body of knowledge. Newman argued that even Natural Theology is based upon knowledge: once you admit that God exists, you must study what that means for humanity. Once you admit that God has revealed Himself, and has revealed that He has become Incarnate among us in time as a Man, you must study what this fact means to human history, to morality, and to society.

If a university leaves Theology out of its curriculum another subject will take its place: science, or literature, or economics, or aesthetics will serve as the organizing basis of all the knowledge presented at the university. Once God and what we know of Him from Creation and Revelation is eliminated, something man made will take its place.

This is a great challenge to all the secular universities here in the USA: they do not teach Theology as a body of knowledge. Even Catholic colleges and universities struggle with teaching Theology as Newman envisioned it, being part of all the other sciences and subjects, influencing how ethics and morality are taught, how the natural and social sciences are researched and developed, how the students learn to think and see the world. A Catholic college or university can have an excellent and faithful Theology department but what it teaches may not be integrated into the rest of the subjects at all. They could be taught as if the truths of God's Creation and Revelation mean nothing to them or the students. I think that Newman would say that neither a secular university nor such a compartmentalized Catholic university was teaching its students true knowledge or the true philosophical method of thinking and learning.

Newman also offered a great warning: even a complete university education with Theology in its proper place has its limits. It can produce what he called a gentleman, it may or may not produce a saint.

Quarry the granite rock with razors, or moor the vessel with silken thread; then may you hope with such keen and delicate instruments as human knowledge and human reason to contend against those giants, the passion and the pride of man.

That's why the first thing he built at the Catholic University of Ireland in Dublin was the university chapel: Mary, Seat of Wisdom. Only the Grace of God can "contend against those giants, the passion and the pride of man."
Posted by Stephanie A. Mann at 12:30 AM