Variations on the Stations

So I was doing some research for a blog post for the National Catholic Register on the Stations of the Cross and how they've developed. The 14 Stations most of us see in our parish churches were fostered by the Franciscans in Spain during the 17th century. As the Catholic Encyclopedia notes, various popes helped with the spread of these Stations and devotion to the Way of the Cross:

Realizing that few persons, comparatively, were able to gain these by means of a personal pilgrimage to the Holy Land, Innocent XI, in 1686, granted to the Franciscans, in answer to their petition, the right to erect the Stations in all their churches, and declared that all the indulgences that had ever been given for devoutly visiting the actual scenes of Christ's Passion, could thenceforth be gained by Franciscans and all others affiliated to their order if they made the Way of the Cross in their own churches in the accustomed manner. Innocent XII confirmed the privilege in 1694 and Benedict XIII in 1726 extended it to all the faithful. In 1731 Clement XII still further extended it by permitting the indulgenced Stations to all churches, provided that they were erected by a Franciscan father with the sanction of the ordinary. At the same time he definitely fixed the number of Stations at fourteen. Benedict XIV in 1742 exhorted all priests to enrich their churches with so great a treasure, and there are few churches now without the Stations. In 1857 the bishops of England received faculties from the Holy See to erect Stations themselves, with the indulgences attached, wherever there were no Franciscans available, and in 1862 this last restriction was removed and the bishops were empowered to erect the Stations themselves, either personally or by delegate, anywhere within their jurisdiction.

The usual list of 14 stations, or stops along the Way of the Cross, combine scriptural and traditional events:

Although that is not the usual wording for some of the stations. There has been a desire for more scriptural stations, without the  traditional events--Stations which can be connected with definite events in the Gospel accounts. Pope St. John Paul II used a different set of stations in 1991 and then Pope Benedict XVI approved them for public use:

1. Jesus in the Garden of Gethsemane
2. Jesus is betrayed by Judas and arrested
3. Jesus is condemned by the Sanhedrin
4. Jesus is denied by Peter
5. Jesus is judged by Pilate
6. Jesus is scourged and crowned with thorns
7. Jesus takes up his cross
8. Jesus is helped by Simon of Cyrene to carry his cross
9. Jesus meets the women of Jerusalem
10. Jesus is crucified
11. Jesus promises his kingdom to the repentant thief
12. Jesus entrusts Mary and John to each other
13. Jesus dies on the cross
14. Jesus is laid in the tomb

Reading that list, I realized that I had seen Stations of the Cross like that before--in Paris, in the church of St. Roch in the First Arrondisement! I had taken pictures of two of them, the second and the third stations: 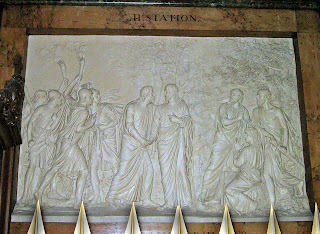 The second Station shows Judas embracing Jesus and preparing to betray Him with a kiss while the Apostles are startled on the right and the guards are carrying weapons and torches on the left. 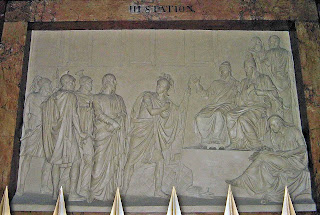 The third Station shows Jesus before Caiaphas. I have not been able to find out, and wasn't able to in 2006 when I first visited Saint Roch, why this church had a different set of Stations. They are not exactly the same as the Scriptural Way of the Cross presented by John Paul II, but they are different than the traditional 14 Stations!

If anyone knows more about these stations, and why they are different, please let me know by leaving a comment below. The parish does have Stations of the Cross on Good Friday, so the devotional for those prayers may exist somewhere but I have not found it!
Posted by Stephanie A. Mann at 12:30 AM