James VI and I, RIP 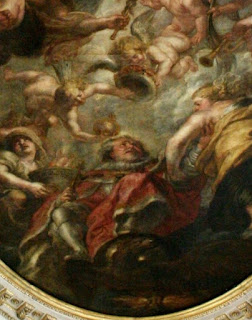 James VI and I of Scotland and England died on March 27, 1625 at Theobalds House. He was 58 years old; he had been the King of Scotland almost all of those 58 years (with regents when he was an infant and young boy, of course); he had just celebrated the 22nd anniversary of his accession as as King of England three days earlier.

This comparative book review discusses the changing reputation of James VI and I, who


. . . has been thoroughly reassessed in the past twenty years. The obvious target was David Willson's toxic treatment in King James VI & I (Jonathan Cape; London, 1956). Jenny Wormald's seminal article 'James VI and I: Two Kings or One?' (History, 68 (1983), 187-209) challenged the hostile historiography which enveloped James, pondering how it was that the Scots and English held such different views of the same monarch. Wormald deconstructed the contemporary (primarily printed) sources that had shaped historians' treatment of the king, particularly polemics by Anthony Weldon, Arthur Wilson, and Francis Osborne. She emphasised their inherent English xenophobia, designed to further a project of Stuart vilification which began in the 1620s and rose to a fever pitch in the 1650s. Having set scholars the task of recovering the authentic James, many took up the call. The results have cast in a more favourable light James' effectiveness with religion, diplomacy, patronage and finance, and the governance of multiple kingdoms. The missing element in this revisionist project has been a full-length study of James capable of supplanting Willson.

Pauline Croft's King James now offers the best overview. Croft brings two substantial strengths to her political study of James in his three kingdoms: an understanding of the period grounded in extensive experience as a published archival historian; and practice coming to grips with her subject in the classroom. Croft has published widely on the first decade of James' reign, with particular emphasis on parliament, finance, and Robert Cecil - her 'modern' study of Cecil is forthcoming. The devil is in the details with subjects like these and those details are in the Jacobean archives that Croft knows well. At the same time, while acknowledgments like Croft's which thank her students sometimes appear clichéd, no one who has taught James' reign can fail to appreciate how valuable the classroom or lecture hall is for working through an understanding of such a 'dauntingly complex' subject. Drawing on these strengths, Croft has produced an interpretive synthesis which is confident, agile, and judicious.

A generation of Scottish historians have fashioned an increasingly nuanced picture of James as king of Scots. We now have assessments of his education and formative years, the politics of his minority, his evolving notions of imperial kingship, and the long struggle to translate his political ideas into practice in the secular, religious, and territorial realms. This is Croft's starting point, which produces a credible assessment of James . . .

Croft's overall assessment of James is appropriately mixed. She recognises his good intentions in matters like Anglo-Scottish union, his openness to different points of view, and his agenda of a peaceful foreign policy within his kingdoms' financial means. His actions moderated frictions between his diverse peoples. Yet he also created new ones, particularly by supporting colonisation that polarised the crown's interest groups in Ireland, obtaining insufficient political benefit with his open-handed patronage, an unfortunate lack of attention to the image of monarchy (particularly after the image-obsessed regime of Elizabeth), pursuing a pro-Spanish foreign policy that fired religious prejudice and opened the door for Arminians within the English church, and enforcing unpalatable religious changes on the Scottish kirk. Many of these criticisms are framed within a longer view of James' reigns, including the legacy - now understood to be more troubled - which he left Charles I. Elements of all these judgments can be debated. With respect to Caroline Scotland, Charles should hardly be forgiven the Act of Revocation, his long-delayed and Anglocentric coronation at Holyrood, or the Laudian canons and prayer book of 1636-37. Yet in such debates we begin to approach an authentic appraisal of James that escapes both the hostile historiography of the past and worn-out frames of reference. We at last assess James on his own terms, as an imperial monarch governing multiple peoples and kingdoms.
Please read the rest there.
According to Martin J. Havran's 1962 book, The Catholics in Caroline England, Catholics were concerned about the forthcoming marriage between James's heir, Charles, and the French princess, Henrietta Maria. James died before the final, religious arrangements were made. Pope Urban VIII granted the necessary dispensations and Catholics thought again that they would be more free to practice their faith under the terms of the marriage agreement. Queen Henrietta Maria would have access to the Catholic Mass and Catholics at Court also hoped to have access to her chapel and worship, but after a time, Charles would not countenance that.

Image Credit: King James I being carried to heaven by angels, on the ceiling of the Banqueting House, painted by Peter Paul Rubens.
Posted by Stephanie A. Mann at 12:30 AM

Email ThisBlogThis!Share to TwitterShare to FacebookShare to Pinterest
Labels: book reviews, Catholics in England, Charles I, Henrietta Maria of France, James VI and I, reputations, RIP