Blessed John Hambley, Pray for Us! 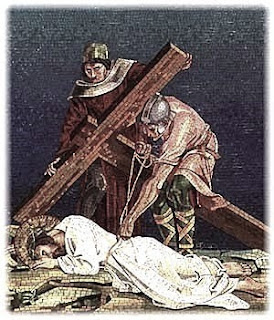 Just a reminder that I'll be on the Son Rise Morning Show during the EWTN hour this morning (5:00 to 6:00 a.m. Central Daylight Savings Time/6:00 to 7:00 a.m. Eastern DST) to talk about the Stations of the Cross, Blessed John Henry Newman's Meditation on the Ninth Station, and Blessed John Hambley! Listen live here. Remember that you can catch up with the podcasts on the Son Rise Morning Show here.

Then check out my latest blog for the National Catholic Register where I discuss those three subjects more completely than is possible in a brief radio interview, especially the story of Blessed John Hambley, who is remembered on the Roman Martyrology today:

All the priests who came to England knew that they could suffer imprisonment, torture, and horrendous execution. They had the example of their protomartyr, Father Cuthbert Mayne in 1577, and then of Fathers Edmund Campion, Ralph Sherwin, and Alexander Briant—and others—in 1581. Nearly every year they learned of another priest being martyred. The Venerable English College in Rome, where many priests studied, started the tradition of a seminarian preaching a sermon on martyrdom before the pope on the feast of St. Stephen, the first martyr. The founder of the Oratorians, St. Philip Neri, greeted the students in the streets with the salutation, “Salvete flores martyrum” (Hail! flowers of the martyrs).

But Father John Hambley, in spite of all these examples, was not ready to suffer. He had given up everything to become a Catholic and a priest, but the threat of physical suffering undid him, according to the 1914 edition of The Lives of the English Martyrs. He was born around 1560 in an Anglican family, but a Catholic friend encouraged him to read a book by Father Robert Persons, SJ and soon he became a Catholic. Because he had stopped attending Church of England services, he left his native Cornwall and then left England for the Continent. Hambley studied for the priesthood in Reims and was ordained on September 22, 1584. On April 6, 1585 he returned to England as a missionary priest under the guidance of Father John Cornelius, SJ (who would be martyred in 1594).

Before Easter in 1586, he was arrested in Taunton, Somerset, tried for being a priest, convicted, and sentenced to death. To save his life, Hambley promised to renounce his Catholic faith; then he escaped from prison. Recaptured on August 14, he faced the same horrible death of being hanged, drawn and quartered—and he fell again. He not only promised to become an Anglican, but he told the authorities everything he knew. Hambley told them about where he said Mass, who attended, who helped him; he told them the names of 15 other priests serving in England and others who are studying abroad.

Strangely, the judges did not trust his statements, perhaps because he gave them so willingly, so Hambley was held in prison in Salisbury until the next public trials, the Assizes, in March of 1587. The judge asked him again if he was ready to renounce the Catholic faith, and Father Hambley said he was—his third fall. Awaiting release, he was given a letter; after he read it, he changed. The next day, he told the judge that he would not renounce the faith and that he regretted his weakness. This time, the threat of “a most cruel death” did not move him to cowardice, and he suffered execution bravely.

Blessed John Hambley, pray for us! Help us to be resolute in our Lenten devotions and in our journey to eternal life!
Posted by Stephanie A. Mann at 12:30 AM