A Memorial in Glasgow 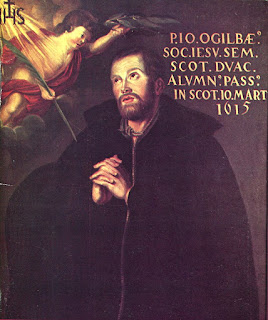 St. John Ogilvie's feast was on March 10, but he's still in the news, as Catholics want to have a memorial to him in Glasgow where he was executed. According to the Catholic News Agency's story:

Four centuries after the martyrdom of St. John Ogilvie, Catholics in Scotland have launched a campaign to mark the place in Glasgow’s city center where he was executed for preaching the Catholic faith.

The Order of the Knights of St. Columba, a U.K.-based Catholic fraternal organization, is backing the effort, the Scottish Catholic Observer reports.

“There should be something,” said the order’s Supreme Knight Charlie McCluskey. “He’s the only Scottish martyr and there’s not even a plaque. Whether you are Catholic, Protestant, whatever, this was an historic event in the history of the city that should be marked.”

Glasgow's Archbishop is in favor of the memorial:

“He died here in our city. He is an honorary Glaswegian. He belongs to Glasgow. And above all, his blood was shed for Christ here in Glasgow,” he said.

The archbishop noted the national shrine to the saint at St. Aloysius Church and a famous painting of him in Glasgow’s St. Andrew’s Cathedral.

Not to be contrary for the sake of being contrary, but I believe he should be honored because he was a martyr for the truth, upholding the Catholic faith, and the teachings of Jesus through His Church. St. John Ogilvie, SJ, did not think of his death as an "historic event"; he was dying for Jesus and His Church. He is an example for Catholics, today, I agree: he and others in his day were willing to sacrifice their lives for Jesus. There was nothing subtle about the restrictions against Catholics in 17th century Scotland and England, that's certain!
Posted by Stephanie A. Mann at 12:30 AM