George Herbert and Advent: "My God, no hymn for thee?" 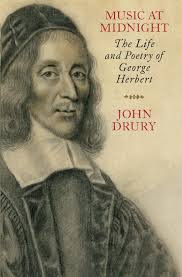 Richard J. Janet, PhD, professor of history, and director of the Thomas More Center for the Study of Catholic Thought and Culture at Rockhurst University, Kansas City, Missouri writes about George Herbert and Advent for Homiletic and Pastoral Review:

Advent, with its focus on beginnings and endings, the coming of Christ at Christmas, and the Second Coming at the end of time, holds the same lesson. Preparing for life is preparing for death, and vice-versa. Do not count the time, count the blessings and the beauty and the love generated during the time. Herbert sensed that. He died in 1633 at the age of 39 years. Shortly before he died, he sent his poems to a friend with instructions to publish them only if he thought they might “turn to the advantage of any dejected poor soul.” Even in death, Herbert looked to the needs of others, and to his own need to share love.

Before he died, however, Herbert celebrated. He noted the turn of the seasons, and the passage of time marked by the liturgical calendar. Nature and prayer came together for him, as reflected in his Christmas poem. The poem begins with Herbert taking a pleasant horseback ride in the country, until he tires and seeks rest in a local inn. There he finds Christ, “wrapt in night’s mantle, stole into a manger.” Herbert longs to brighten his own “dark soul” to provide a home for Christ, and at the end of the poem offers a play on words as he looks for a Sun/Son to illuminate his world. As he does so, he sings and compares his soul to the shepherd and his flock. The country parson in Herbert comes out as he likens his hymn to nature, and praises Christ as the true Sun/Son and candle-holder for the universe.

The shepherds sing: and shall I silent be?
My God, no hymn for thee?
My soul ’s a shepherd too: a flock it feeds
Of thoughts, and words, and deeds.
The pasture is thy word: the streams, thy grace
Enriching all the place.
Shepherd and flock shall sing, and all my powers
Out-sing the day-light hours.
Then we will chide the sun for letting night
Take up his place and right:
We sing one common Lord: wherefore he should
Himself the candle hold.

More about the  Thomas More Center for the Study of Catholic Thought and Culture at Rockhurst University here.
Posted by Stephanie A. Mann at 12:30 AM