Another "A Christmas Carroll" 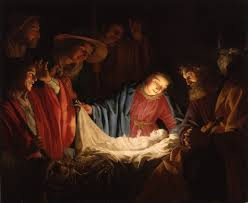 REioyce, reioyce, this day is come
Saluation vnto Christendome:
All that will heare their blest Redeemers voyce,
Let them all with mirth reioyce, reioyce.
The Sauiour of the world is borne,
To ransome vs that were forlorne:
He left the Heauens, and came to vs on earth,
And from a blessed Virgins wombe had birth.
Here a mighty mystery well was wrought,
whose depth no man can gather;
A Mayden-mother pure, a Sonne forth brought,
and no man was the father:
God aboue, with peace and loue,
The sinfull world possessed
With heauenly treasure, past all measure,
Who is euer blessed.
He this day to Grace a feast,
sent his Sonne to be a Guest:
Let vs then, like thankfull men
giue entertainment to him:
And let vs still with heart and will,
our best of seruice doe him:
Himselfe for vs he hath giuen,
to draw vs from earth to heauen.
Therefore for all his paine,
let's giue him our selues againe.
TO wipe away our sinnes great summes,
Gods Sonne and heire in person comes;
He left his glorious and Immortall throne,
and vnderneath his Fathers curse did groane:
Downe from the heauens to the earth he came,
to honour vs he tooke our shame;
He suffer'd death that we might liue thereby,
and through his merits reigne eternally.
Seeing he hath with his precious blood
wash'd cleare our foule offences,
How can we render any thing
that may be recompences,
Since we may not any way
giue any thing worth taking;
Or all that can be done by man,
no satisfaction making:
Let vs doe as Dauid sayes,
giue him honour, laud and praise.
Let Christmas day put vs in minde,
that Christ was borne this day:
Let's entertaine him here, that we
may entertaine him aye.
That we all with one heart and desire,
amidst the Celestiall Quire
All honour and praise may sing,
to Christ our heauenly King.
John Taylor the Water Poet, wrote this along with The Complaint of Christmas, a pamphlet about the Puritan ban on Christmas (Father Christmas visits England and decides to try again another year). More about him from Bartleby.com:

John Taylor, the Thames waterman, also resorted to publication by subscription, and, in his case, his whimsical personality, added to the amusement afforded by the rough wit and boisterous humour of his effusions, secured a large number of patrons. Before starting on one of his eccentric journeys, he would circulate a quantity of prospectuses or “Taylor’s bills,” as he called them, with the object of securing subscribers for the account of his travels to be afterwards published. In this way, he obtained more than sixteen hundred subscribers to The Pennyles Pilgrimage (1618), a record of his journey on foot into Scotland. On the strength of this list, he had 4500 copies printed, but nearly half the subscribers refused to pay, and he castigated the defaulters in an amusing brochure entitled A Kicksey Winsey, or, A Lerry Come-Twang, which he issued in the following year. He also worked off copies of his publications by “presenting” them to various people, not forgetting to call on the morrow for “sweet remuneration.” But, notwithstanding king James’s dictum, as reported by Ben Jonson, that he did not “see ever any verses in England equal to the Sculler’s,” Taylor cannot be accounted as anything more than a voluminous scribbler, possessed of irrepressible assurance and facile wit of a coarse vein. He had, however, the saving grace of acute observation of men and manners, and this has given his productions a certain value for the student of social history. The term “literary bargee” befits him much better than his own self-styled title “the water-poet”; and his unrelenting satirical persecution of Thomas Coryate shows him in an unamiable light. In 1630, he gathered into one folio volume, which he called All the Workes of John Taylor the Water-poet, sixty-three of his pieces in prose and verse; but, before his death, in 1653, the number of his publications had exceeded one hundred and fifty.
Posted by Stephanie A. Mann at 12:30 AM