Elizabeth I and Her Catholic Subjects 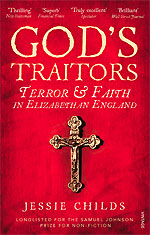 Jessie Childs, the author of God's Traitors: Terror & Faith in Elizabethan England, had this article ("Elizabeth I's War with England's Catholics") published in the May 2014 issue of the BBC History Magazine:

In 1828, builders removing a lintel over a doorway at Rushton Hall in Northamptonshire were surprised to see an old, beautifully bound book come down with the rubble. They decided to investigate and knocked through a thick partition wall, exposing a recess, about 5 feet long and 15 inches wide. Inside, wrapped up in a large sheet, was an enormous bundle of papers and books that had once belonged to Sir Thomas Tresham, a Catholic gentleman in the reign of Elizabeth I.

There have been other discoveries in other counties: a secret room chanced upon by a boy exploring a derelict wing of Harvington Hall, near Kidderminster, in 1894; a small wax disc bearing the imprint of a cross and a lamb (an Agnus Dei), found in a box nailed to a joist by an electrician working in the attic of Lyford Grange, Berkshire, in 1959; and a ‘pedlar’s chest’ containing vestments, a chalice and a portable altar, bricked in at Samlesbury Hall, Lancashire. Each bears testimony to the resourcefulness and courage with which Catholic men and women tried to keep their faith in Protestant England.

Under Elizabeth I, Catholics grew adept at concealment. Their lifeblood – the Mass – was banned. Anyone who heard it risked a fine and prison. Hence the need for secret Mass-kits and altar-stones small enough to slip into the pocket. Their priests – essential agents of sacramental grace – were outlawed.

Reconciling anyone to Rome (and, indeed, being reconciled) was made treason. After 1585, any priest ordained abroad since 1559, and found on English soil, was automatically deemed a traitor and his lay host a felon, both punishable by death. Hence the need for priest-holes, like the one at Harvington Hall, or at Hindlip, where a feeding tube was embedded in the masonry.

Even personal devotional items like rosary beads or the Agnus Dei found at Lyford were regarded with suspicion, since a statute of 1571 had ruled that the receipt of such ‘superstitious’ items, blessed by the pope or his priests, would lead to forfeiture of lands and goods.

It is impossible to know how many Catholics there were in Elizabethan England, for few were willing to be categorised and counted. John Bossy (defining a Catholic as one who habitually, though not necessarily regularly, used the services of a priest) estimated some 40,000 in 1603, less than one per cent of the population.

Read the rest there (for as long as it's available!)
Posted by Stephanie A. Mann at 12:30 AM