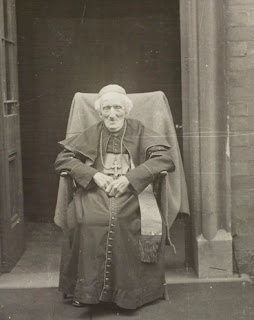 John Henry Cardinal Newman died on August 11, 1890. In 1990, Pope St. John Paul II wrote an official letter to the Archbishop of Birmingham, remarking on the centenary of Newman's death:

At the approach of the first Centenary of the death of John Henry Newman and in response to your kind invitation, I gladly associate myself with the celebrations that mark this event in England and indeed in many countries throughout the world. The memory of the great Cardinal’s noble life and his copious writings seem to touch the minds and hearts of many people today with a freshness and relevance that has scarcely faded with the passing of a century.

The Centenary year coincides with the beginning of a period of profound change in world events. This period has begun with new prospects for genuine freedom and signs of a renewed awareness of the need to build life, both individual and social, on the solid foundation of unfailing respect for the human person and his inalienable God-given dignity. To all searching minds in this present historical context, Newman’s voice speaks with a timely message.

Newman’s long life shows him to have been an ardent disciple of truth. The unfolding of his career confirms the single-heartedness of his aims as expressed in the following words which he made his own: "My desire hath been to have Truth for my chiefest friend, and no enemy but error" (J. H. Newman The Via Media, London 1911, vol. 1, pp. XII-XIII). In periods of trial and suffering he persevered with confidence, knowing that time was on the side of truth.

Newman’s quest for the truth led him to search for a voice that would speak to him the authority of the living Christ. His example holds a lasting appeal for all sincere scholars and disciples of truth. He urges them to keep asking the deeper, more basic questions about the meaning of life and of all human history; not to be content with a partial response to the great mystery that is man himself; to have the intellectual honesty and moral courage to accept the light of truth, no matter what personal sacrifice it may involve. Above all, Newman is a magnificent guide for all those who perceive that the key, the focal point and the goal of all human history is to be found in Christ (Cfr. Gaudium et Spes, 10) and in union with him in that community of faith, hope and charity, which is his holy Church, through which he communicates truth and grace to all (Cfr. Lumen Gentium, 8).

Newman had become a convert as a man of conscience; it was his conscience that led him out of the old ties and securities into the world of Catholicism, which was difficult and strange for him. But this way of conscience is everything except a way of self-sufficient subjectivity: it is a way of obedience to objective truth.

The second step in Newman's lifelong journey of conversion was overcoming the subjective evangelical position in favour of an understanding of Christendom based on the objectivity of dogma. In this connection I find a formulation from one of his early sermons to be especially significant today:

"True Christendom is shown... in obedience and not through a state of consciousness. Thus, the whole duty and work of a Christian is made up of these two parts, Faith and Obedience; "looking unto Jesus' (Heb 2: 9)... and acting according to His will.... I conceive that we are in danger, in this day, of insisting on neither of these as we ought; regarding all true and careful consideration of the Object of faith as barren orthodoxy, technical subtlety... and... making the test of our being religious to consist in our having what is called a spiritual state of heart...".

In this context some sentences from The Arians of the Fourth Century, which may sound rather astonishing at first, seem important to me: "...to detect and to approve the principle on which... peace is grounded in Scripture; to submit to the dictation of truth, as such, as a primary authority in matters of political and private conduct; to understand... zeal to be prior in the succession of Christian graces to benevolence".
Newman had been in failing health since the end of 1889; he was nearly blind (having memorized two votive Masses so he could offer Mass privately without reading from the Roman Missal) and had indeed said Mass the last time on Christmas day that year. Unable to read the Breviary, he prayed the Rosary.

Two days before Newman died his niece Grace Longford, the only child of his estranged sister Harriett visited him. Newman had not seen her since she was three years old. Prayer for Canonization: ETERNAL Father, You led JOHN HENRY NEWMAN to follow the kindly light of Truth, and he obediently responded to your heavenly calls at any cost. As writer, preacher, counsellor and educator, as pastor, Oratorian, and servant of the poor he laboured to build up your Kingdom. Grant that through your Vicar on Earth we may hear the words, 'Well done, thou good and faithful servant, enter into the company of the canonized saints.' May you manifest your Servant's power of intercession by even extraordinary answers to the prayers of the faithful throughout the world. We pray particularly for our intentions in his name and in the name of Jesus Christ your Son our Lord. Amen.

Note that his feast, celebrated in England and Wales, is on October 9, the date of his acceptance into the Catholic Church in 1845, instead of being on the date of his death--of his entrance into eternal life. Since August 11 was already the feast day of St. Clare of Assisi, this alternate date was chosen when Pope Benedict XVI beatified Newman in 2010--perhaps looking forward to the day when he is proclaimed a saint and honored on the Roman Calendar throughout the world!
Posted by Stephanie A. Mann at 12:30 AM