War and Peace? The End of "The Flying Inn" 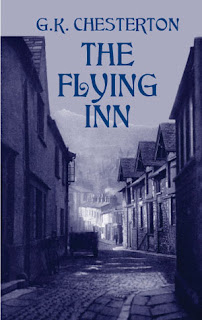 Our Greater Wichita American Chesterton Local Society meets tonight (6:30 p.m.) at Eighth Day Books (which definitely has a sign) to continue/conclude our discussion of The Flying Inn. Just to give away the plot, here's the end of the novel, which we definitely plan to explicate together:

The palisade, put up by the new landlord in front of the old tangled ground by the tunnel, she had long regarded as something as settled and ordinary as one of the walls of the drawing room. It swung and split and sprang into a thousand pieces under the mere blow of human bodies bursting with rage; and the great wave crested the obstacle more clearly than she had ever seen any great wave crest the parade. Only, when the fence was broken, she saw behind it something that robbed her of reason; so that she seemed to be living in all ages and all lands at once. She never could describe the vision afterward; but she always denied it was a dream. She said it was worse; it was something more real than reality. It was a line of real soldiers, which is always a magnificent sight. But they might have been the soldiers of Hannibal or of Attila, they might have been dug up from the cemeteries of Sidon and Babylon, for all Joan had to do with them. There, encamped in English meadows, with a hawthorn-tree in front of them and three beeches behind, was something that has never been in camp nearer than some leagues south of Paris, since that Carolus called The Hammer broke it backward at Tours.

There flew the green standard of that great faith and strong civilization which has so often almost entered the great cities of the West; which long encircled Vienna, which was barely barred from Paris; but which had never before been seen in arms on the soil of England. At one end of the line stood Philip Ivywood, in a uniform of his own special creation, a compromise between the Sepoy and the Turkish uniform. The compromise worked more and more wildly in Joan's mind. If any impression remained it was merely that England had conquered India and Turkey had conquered England. Then she saw that Ivywood, for all his uniform, was not the Commander of these forces, for an old man, with a great scar on his face, which was not a European face, set himself in the front of the battle, as if it had been a battle in the old epics, and crossed swords with Patrick Dalroy. He had come to return the scar upon his forehead; and he returned it with many wounds, though at last it was he who sank under the sword thrust. He fell on his face; and Dalroy looked at him with something that is much more great than pity. Blood was flowing from Patrick's wrist and forehead, but he made a salute with his sword. As he was doing so, the corpse, as it appeared, laboriously lifted a face, with feeble eyelids. And, seeming to understand the quarters of the sky by instinct, Oman Pasha dragged himself a foot or so to the left; and fell with his face toward Mecca.

After that the turret turned round and round about Joan and she knew not whether the things she saw were history or prophecy. Something in that last fact of being crushed by the weapons of brown men and yellow, secretly entrenched in English meadows, had made the English what they had not been for centuries. The hawthorn-tree was twisted and broken, as it was at the Battle of Ashdown, when Alfred led his first charge against the Danes. The beech-trees were splashed up to their lowest branches with the mingling of brave heathen and brave Christian blood. She knew no more than that when a column of the Christian rebels, led by Humphrey of the Sign of the Ship, burst through the choked and forgotten tunnel and took the Turkish regiment in the rear, it was the end.

That violent and revolving vision became something beyond the human voice or human ear. She could not intelligently hear even the shots and shouts round the last magnificent rally of the Turks. It was natural, therefore, that she should not hear the words Lord Ivywood addressed to his next-door neighbour, a Turkish officer, or rather to himself. But his words were:

"I have gone where God has never dared to go. I am above the silly supermen as they are above mere men. Where I walk in the Heavens, no man has walked before me; and I am alone in a garden. All this passing about me is like the lonely plucking of garden flowers. I will have this blossom, I will have that."

The sentence ended so suddenly that the officer looked at him, as if expecting him to speak. But he did not speak.

But Patrick and Joan, wandering together in a world made warm and fresh again, as it can be for few in a world that calls courage frenzy and love superstition, feeling every branching tree as a friend with arms open for the man, or every sweeping slope as a great train trailing behind the woman, did one day climb up to the little white cottage that was now the home of the Superman.

He sat playing with a pale, reposeful face, with scraps of flower and weed put before him on a wooden table. He did not notice them, nor anything else around him; scarcely even Enid Wimpole, who attended to all his wants.

"He is perfectly happy," she said quietly.

Joan, with the glow on her dark face, could not prevent herself from replying, "And we are so happy."

"Yes," said Enid, "but his happiness will last," and she wept.

"I understand," said Joan, and kissed her cousin, not without tears of her own.

I take it that Lord Ivywood has gone mad after seeing his ally's army defeated, struck down by his hubris ("I have gone where God has never dared to go."). Thus the vaunted Superman ("I am above the silly supermen as they are above mere men") who thought he could remake the world is left playing with small pieces of that world. I don't know how he can be perfectly happy, however, since he is out of his mind!