The Narrow Gate and the Cause of Martyrdom 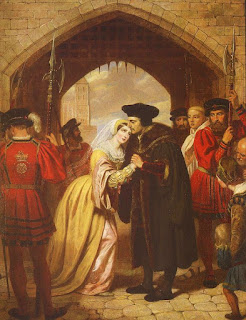 Martyrdom is in practice narrow. When St. Thomas More died on a scaffold in Henry VIII’s kingdom, it was for a narrow matter. Henry said he was the head of the Catholic Church in that realm, and Thomas disagreed. Thomas believed only a bishop could head the Church, specifically the bishop who had succeeded St. Peter on the chair in Rome.

It is a strange thing, though, that Henry would kill for narrowness. It was so important that he, with the backing of Parliament, considered it treason to disagree. Henry and Thomas agreed on nearly everything else in Catholic teaching, and Henry died still an enemy of Protestantism. For his own need to control the Church, however, Henry repeatedly killed.

Few resisted him, perhaps because the matter was so narrow. Would it really matter if Henry were called the head of the Church? It would not change the reality, after all. The sacraments also continued, the bishops and priests still taught, and none but the religious orders, possessors of great wealth, were entirely despoiled. Many probably thought Thomas, and the sole bishop to lose his life resisting, St. John Fisher, were unreasonable.

He makes a connection to Catholics and other Christians resisting State coercion today:

But we should always remember our Lord’s warning to enter by the narrow gate. “For wide is the gate and broad is the way that leads to destruction, and many there are who enter that way. How narrow the gate and close the way that leads to life! And few there are who find it” (Matt. 7:13-14). St. Thomas More and St. John Fisher with the grace of God found the narrow gate. We must likewise prepare to resist any claim by an earthly power to jurisdiction over a matter of faith and morals. St. Peter, the first Bishop of Rome, gave us the fundamental rule: “ ‘We must obey God rather than men’ ” (Acts 5:29).

I've drafted an article for the Feast of Saints John Fisher and Thomas More--focusing on the Bishop of Rochester this time--in connection with the annual Fortnight for Freedom, which this year focuses on witnesses/martyrs from the early Church until today (including the Coptic martyrs beheaded on the beach in Libya last year by ISIL/ISIS). And, I'm working on a presentation for the Eighth Day Institute's Sisters of Sophia group on Margaret More Roper, St. Thomas More's daughter, to be given on June 21, the beginning of the Fortnight and the vigil of her father's feast!