Newman, Gladstone, and Conscience AND Obedience 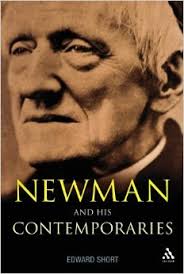 The attack was swift and fierce. The leading light and liberal lion in British politics, Prime Minister (sic) W.E. Gladstone, launched a scathing broadside against Catholics in the British Empire. Fearful that a Catholic’s allegiance to the Church in Rome threatened a vile treachery, Gladstone fulminated that “no one can become [the Catholic Church’s] convert without renouncing his moral and mental freedom and placing his civil loyalty and duty at the mercy of another.”

It wasn’t the first time it had happened, English Catholic priest (and convert from Anglicanism) John Henry Newman surely lamented. Nor would it be the last. And so he was compelled to respond. In his Letter to the Duke of Norfolk written in 1875, Newman schooled the prime minister on the true “moral and mental freedom” of the Catholic faithful. The letter, in fact, turned into a brilliant treatise on the Catholic Conscience. And it is doubtful Gladstone even knew what hit him.

Read the rest there, which includes excerpts from the chapter on conscience in Newman's letter.

Gladstone wasn't Prime Minister in 1874 when he wrote his pamphlet four years after the declaration of the doctrine of Papal Infallibility in 1870 at the First Vatican Council: The Vatican Decrees in Their Bearing on Civil Allegiance. He did know what hit  him: he responded to Newman's Letter to the Duke of Norfolk in another pamphlet, Vaticanism: an Answer to Reproofs and Replies. In that second pamphlet, Gladstone states that England has not yet realized what it lost when Newman became a Catholic--it would take time, as it had in the case of John Wesley, for historians to assess the effects of Newman's conversion on religion in England.

I'd recommend the chapter on "Newman and Gladstone" (as well as the entire book) from Edward Short's Newman and His Contemporaries to understand this entire episode and Newman's great achievement in writing his pamphlet. Short describes how Newman wanted to respond to not only Gladstone but those ultra-Ultramontanists like W. G. Ward who were saying things like the Pope "has the power of deposing any sovereign, whose government he may consider injurious to the spiritual welfare of that country" and that "the Pope's temporal power is 'the very bulwark and citadel of Catholic order, liberty, and progress'" (page 234). Newman complained how much Ward mistrusted him, even hoping that Anglicans would not come to the Catholic Church through his influence! Short also describes how carefully Newman wrote this pamphlet, quoting him: it was "the toughest job I ever had." He was not only reminding his audience of the classic Catholic idea of conscience, with all its responsibilities and rights, but also narrowing the kind of papal statements Catholics would respond to with required obedience: to matters of faith and morals, not practical matters. Whatever the pope teaches, however, the Catholic must consider it with a fully formed and developed conscience, not its counterfeit. As I wrote in the January/February 2014 issue of OSV's The Catholic Answer Magazine:

Since the teaching authority of the pope and the Church concerns matters of faith and morals, of “abstract doctrine” and “the condemnation of particular and given errors,” Newman states there is no conflict at all between it and the individual conscience: the conscience seeks truth, and the Church teaches and defends truth. The pope’s authority as Christ’s Vicar on Earth relies upon the authority of conscience, that “aboriginal Vicar of Christ.”

Blessed John Henry Newman further states that for one to oppose even “the supreme, though not infallible authority of the pope” in some matter (he uses the example of a pope prohibiting Catholics from drinking wine or beer), the individual cannot rely on the counterfeit idea of conscience: “serious thought, prayer and all available means of arriving at a right judgment” must be followed, and the burden of proof is on the individual, not on the pope.

Joseph Ratzinger, both as cardinal and as pope, had praised Newman’s “clear avowal of the papacy.” Commenting on Newman’s beatification in his comments to the Roman Curia on Dec. 20, 2010, Pope Benedict XVI summarized Newman’s understanding of conscience: “Conscience is both capacity for truth and obedience to the truth which manifests itself to anyone who seeks it with an open heart.” Because Blessed John Henry Newman followed the “kindly light” of truth, it led him to become a Catholic in 1845, and as Pope Benedict noted, that conversion cost him everything “that was dear and precious to him,” perhaps even his great opportunity to influence Christian theology in his lifetime. His life as a Catholic was obscure and filled with failed projects, but his letter to the Duke of Norfolk provided a great example of the influence he could have.

The chapter on conscience ends with a toast that many have misinterpreted: “Certainly, if I am obliged to bring religion into after-dinner toasts (which indeed does not seem quite the thing), I drink — to the pope, if you please — still, to conscience first, and to the pope afterwards.” Pope Benedict provides us with the correct interpretation: Newman is not reverting to that counterfeit version of conscience as “the right of self-will.” In the first toast Newman is again expressing our natural ability to seek and find the truth; the second toast is “dedicated to the pope because it is his task to demand obedience to the truth.”
Posted by Stephanie A. Mann at 12:30 AM