As historians study the past, finding documents, locating contemporary reports, etc., I think one of the interesting aspects of these efforts is identifying a person. Think of the identity issues for Shakespeare--the lost years, the different signatures, the different spellings of his last name, the different portraits. Another example: we don't really know what Anne Boleyn looked like; we have contemporary descriptions but no authenticated portrait. The same is true of Catherine Howard, the other wife Henry VIII had beheaded: we have never found a portrait of her. Who knows, we may some day: but until then we don't have a clear vision of what she looked like. And then there is the issue of alias: many of the missionary priests coming to England under the threat of arrest and trial for treason used alias to disguise their identity. There are definite gaps and the careful historian observes their mysteries carefully. We have to "Mind the Gap"! 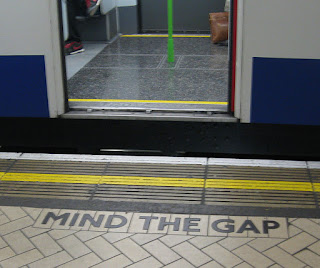 On his Recusants and renegades blog, Martin Robb is trying to identify a certain person and confirm that he was Catholic priest in Tudor England, with all its religious change and confusion:

In my last post I noted that Thomas Lucke’s will of 1551, with its explicitly Catholic preamble, suggests that Thomas retained his attachment to England’s traditional faith, despite the fact that when he made his will he was serving as a priest in the reformed Church of England, two years after the Catholic mass had been banned by Edward VI. In addition to this evidence of Thomas’ religious sympathies, his will is also a useful source of information about his relatives and contemporaries, including as it does a substantial number of bequests. I’ve been following up some of these names, in an attempt to understand the milieu in which Thomas Lucke, and my other sixteenth-century ancestors, lived.

In his will, Thomas Lucke makes a number of bequests to his niece Alice, my 12 x great grandmother. One of them reads as follows:

I wyll of that monye that ys in Gregorye Martynes hands of Mayghfelde xlv to the povertie there to be dystrybuted by my executor. And the Resydue of the monye in his hands, I wyll halfe to Alice Lucke: the other halffe I wyll equally betwene Thomasyn Lucke and Elizabeth Lucke, by the hands of my executor to theme to be delyvred.

So, Robb has been in search of Gregory Martin and has been frustrated:

However, there is one other reference to a Gregory Martin in the records, and it’s an intriguing one. In 1529 Robert Sawyer of Mayfield made his will. The opening paragraph is in Latin and it culminates in a list of witnesses, which includes the name ‘Gregorio Marten’. The word that follows this name is difficult to read, but it could be ‘clico’, which might be an abbreviation for ‘clerico’. Indeed, the transcript by the Sussex Record Society translates the word as ‘clerk’: in other words, priest.

Is this the same person who would appear in the wills of John and Thomas Lucke some twenty years later, and was he really a priest? Unfortunately, I’ve found no trace of a Gregory Martin in the clergy records, but they only begin in 1540. Could he have been a member of a religious order, rather than a secular priest? Then again, if the person mentioned in those later wills was a priest, why was he not described as such, given that Thomas Lucke doesn’t hesitate to append the word ‘clerke’ to the name of Richard Cressweller, one of the witnesses to his will? Had Gregory Martin ceased to serve as a priest by 1551, or is this a different person altogether?

And then he wonders if there's a connection between his Gregory Martin and the Father Gregory Martin who worked on the Douai-Rheims translation of the Holy Bible into English! Read the rest there; it's a fascinating exploration of identity in the sixteenth century:

On the other hand, if we could prove a connection, it might be further proof of the Catholic sympathies of my Lucke ancestors, especially if Gregory Martin of Mayfield was actually a (former?) priest. However, even if he turns out to have been born elsewhere in Sussex, and even if he was from Mayfield, we have no evidence to connect him with the Gregory Martin of Mayfield mentioned in the wills of John and Thomas Lucke. The fact that they shared a name, and an unusual one at that, suggests some kind of connection – but what?

Illustration credit: CC license from Wikipedia commons.
Posted by Stephanie A. Mann at 12:30 AM