The Murder in the Cathedral 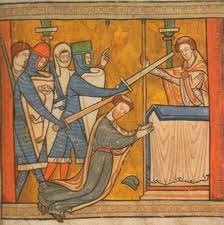 Eyewitness to History has this detail about how Henry II's knights accosted and murdered the Archbishop of Canterbury on December 29, 1170, from the report of Edward Grim, a monk at the cathedral:

"He answered, 'There has been no satisfaction, and I will not absolve them.'

'Then you shall die,' they cried, 'and receive what you deserve.'

'I am ready,' he replied, 'to die for my Lord, that in my blood the Church may obtain liberty and peace. But in the name of Almighty God, I forbid you to hurt my people whether clerk or lay.'

"Then they lay sacrilegious hands on him, pulling and dragging him that they may kill him outside the church, or carry him away a prisoner, as they afterwards confessed. But when he could not be forced away from the pillar, one of them pressed on him and clung to him more closely. Him he pushed off calling him 'pander', and saying, 'Touch me not, Reginald; you owe me fealty and subjection; you and your accomplices act like madmen.'

"The knight, fired with a terrible rage at this severe repulse, waved his sword over the sacred head. 'No faith', he cried, 'nor subjection do I owe you against my fealty to my lord the King.'

"Then he received a second blow on the head but still stood firm. At the third blow he fell on his knees and elbows, offering himself a living victim, and saying in a low voice, 'For the Name of Jesus and the protection of the Church I am ready to embrace death.'"Then the unconquered martyr seeing the hour at hand which should put an end to this miserable life and give him straightway the crown of immortality promised by the Lord, inclined his neck as one who prays and joining his hands he lifted them up, and commended his cause and that of the Church to God, to St. Mary, and to the blessed martry Denys. Scarce had he said the words than the wicked knight, fearing lest he should be rescued by the people and escape alive, leapt upon him suddenly and wounded this lamb who was sacrificed to God on the head, cutting off the top of the crown which the sacred unction of the chrism had dedicated to God; and by the same blow he wounded the arm of him who tells this. For he, when the others, both monks and clerks, fled, stuck close to the sainted Archbishop and held him in his arms till the one he interposed was almost severed.

"Then the third knight inflicted a terrible wound as he lay, by which the sword was broken against the pavement, and the crown which was large was separated from the head. The fourth knight prevented any from interfering so that the others might freely perpetrate the murder."

Like St. Thomas More, Becket is sometimes viewed as a controversial character, as this History Today article notes:

Thomas Becket, Archbishop of Canterbury, is probably best known in history for his infamous clashes with King Henry II of England in the 12th century. What started as a supposedly close relationship between king and clerk eventually led to a irreconcilable falling out as Church clashed with State. Their drama culminated with four knights from Henry's court who went to Christ Church in Canterbury to confront Becket. When the archbishop remained defiant, he met a grisly end, dying at the altar with the top of his skull severed. In death, however, he seemed to have the last laugh. His murder in the cathedral was seen as martyrdom, which resonated with the medieval people. An immense following built up after his death, with reports of miraculous healing occurring near his place of death, and ecclesiastical writers hastened to promote his cult with a flurry of hagiographical writings. The cult became so widespread, in fact, that it overtook St Cuthbert's cult in Durham as the most popular saint cult in England during the late Middle Ages, eventually reaching an international level of fame. The impact of Becket's cult was not limited to hagiography either. The pilgrims in Geoffrey Chaucer's The Canterbury Tales travel to Canterbury to pay their respects to St Thomas Becket's shrine. Clearly Becket's cult had appealed to many different members of society by the end of the fourteenth century. For a holy man lauded as the most popular saint in England during the late Middle Ages, however, the question remains: what generated such polarised controversy?

Despite the surge of devoted hagiographical texts in the wake of his demise, not everyone spoke highly of Becket. In Draco normannicus, royalist Stephen Rouen viewed him as a villain who was guilty of peculation. Cluniac monk Gilbert Foliot's opinion of Becket was particularly critical, showing that some members of the ecclesiastical community were responding unfavourably to Becket as well. Gilbert claimed that he bought his way into his chancellor position and then used his royal connections to become archbishop, and thus he felt as if he had to overcompensate for this and prove himself as a worthy and capable archbishop. Other accounts criticised Becket for his stubborn and self-indulging behaviour, which made him dangerous, and that he showed few signs of piety and saintliness in life. The implications of hagiographic rhetoric are worth considering as well. Hagiography idealises the saint with the intention of edification in imitation of Christ. The ecclesiastical community wanted to promote his cult and tailor his life to fit a Christian image. The success of this rhetoric benefitted them financially and spiritually, and thus it was essential that they idealised Becket's death, comparing him to a martyr dying for his faith. . . .

While the interpretation of his historical role is ultimately complex and disputable, Becket's controversial nature is understandable. Becket had plenty of criticism in life and in death, but the impact of his cult is undeniable, influencing the literature, history, life, and even spirituality of the medieval world and beyond. There are still traces of Becket across England, with numerous churches named after him. Although Henry VIII reportedly destroyed his bones during the Dissolution of the Monasteries in the sixteenth century, Becket's memory lives on in the subconscious of the English people, whether one views him as a saint or quite the opposite.

The question about whether or not Henry VIII's minions destroyed Becket's bones--there's no doubt that they destroyed the shrine--was the subject of a 1995 book from Yale University Press: The Quest for Becket's Bones by John Butler: 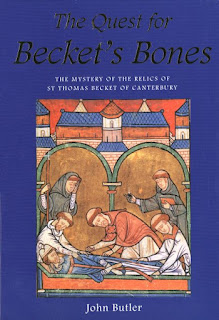 Thomas Becket was murdered in Canterbury Cathedral in 1170. Fifty years after his martyrdom, his remains were placed in a spectacular shrine behind the high altar, which became a place of pilgrimage and miracle. The shrine was destroyed during Henry VIII's reformation in 1538, and the bones disappeared.

For 450 years the whereabouts of the remains of the greatest English saint have been the subject of speculation and rumor. The generally accepted view is that they were burned by the King's Commissioners. But others have suggested that the monks secreted them outside the cathedral precincts and later reinterred them in an unmarked grave. In 1888, workmen excavated the eastern crypt of the cathedral and uncovered ancient bones of a tall man whose skull had seemingly been cleft by a sword. In 1948 the bones were reinterred and re-examined by medical scientists. In 1990 two Foreign Legionnaires—Peregrine Prescott and Risto Pronk—were arrested attempting to break into the cathedral to liberate Becket's bones from a site reputedly known only to a small group of Catholics. Each of these events stimulated interest and spurred debate in private and public.

The history of the quest for Becket's bones is a compelling story of politics, science, conjecture, romanticism, and mystery. This book tells that story, sifting the known evidence, uncovering much that is new, and suggesting several hypotheses for the resting place of the elusive bones.

More here on Henry VIII's campaign against St. Thomas a Becket, in which he proclaimed that violation of a secular law precluded his canonization.
Posted by Stephanie A. Mann at 1:00 AM