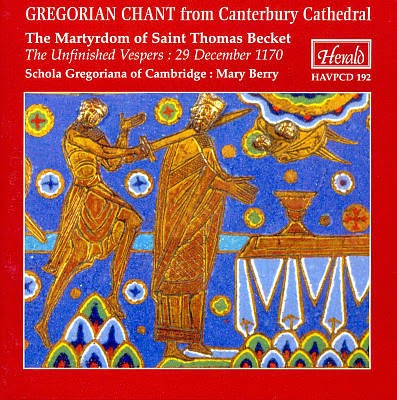 As the recently titled Supreme Head and Governor of the Church of England, Henry VIII could not only dissolve his own marriages but he could unmake saints. He proclaimed that the former Archbishop of Canterbury had violated English praemunire laws and thus could not be considered a saint, on November 16, 1538:

“ITEM, for as moche as it appereth now clerely, that Thomas Becket, sometyme Archbyshop of Canterburie, stubburnly to withstand the holsome lawes establyshed agaynste the enormities of the clergie, by the kynges highness mooste noble progenitour, kynge HENRY the Seconde, for the common welthe, reste, and tranquillitie of this realme, of his frowarde mynde fledde the realme into Fraunce, and to the bishop of Rome, mayntenour of those enormities, to procure the abrogation of the sayd lawes, whereby arose moch trouble in this said realme, and that his dethe, which they untruely called martyrdome, happened upon a reskewe by him made, and that, as it is written, he gave opprobrious wordes to the gentyllmen, whiche than counsayled hym to leave his stubbernesse, and to avoyde the commocion of the people, rysen up for that rescue. And he not only callyd the one of them bawde, but also toke Tracy by the bosome, and violently shoke and plucked hym in suche maner, that he had almoste overthrowen hym to the pavement of the Churche; so that upon this fray one of their company, perceivynge the same, strake hym, and so in the thronge Becket was slayne. And further that his canonization was made onely by the bysshop of Rome, bycause he had ben a champion of maynteyne his usurped auctoritie, and a bearer of the iniquitie of the clergie, for these and for other great and urgent causes, longe to recyte, the Kynge’s {228} Maiestie, by the advyse of his counsayle, hath thought expedient to declare to his lovynge subjectes, that notwithstandynge the sayde canonization, there appereth nothynge in his lyfe and exteriour conversation, wherby he shuld be callyd a sainct, but rather estemed to have ben a rebell and traytour to his prynce. Therefore his Grace strayghtly chargeth and commandeth that from henseforth the sayde Thomas Becket shall not be estemed, named, reputed, nor called a sayncte, but bysshop Becket; and that his ymages and pictures, through the hole realme, shall be putte downe, and avoyded out of all churches, chapelles, and other places; and that from henseforthe, the dayes used to be festivall in his name shall not be observed, nor the service, office, antiphoners, colletes, and prayers, in his name redde, but rased and put out of all the bokes.”

Henry had already ordered the destruction of St. Thomas's tomb at Canterbury in September that year but now all traces of St. Thomas in English religious life were to be removed. Since many parish churches were dedicated to him and all the prayer books in print commemorated his feast, there was much work to be done. This blog post from the British Library shows some of the Books of Hours defaced in response to Henry VIII's edict.

So the answer to Henry II's infamous question ("who will rid me of this troublesome priest?!) came from Henry VIII--except that the Church of England today honors Thomas Becket, Archbishop of Canterbury on their calendar. For an eye-witness account, read here. For an ear-witness account, the Schola Gregoriana of Cambridge recorded the Vespers that would have been celebrated the night of December 29, breaking off at the point when Henry II's knights assaulted the Archbishop of Canterbury. The CD also includes the liturgical office for St. Thomas a Becket from a breviary with musical notes that escaped Henry VIII's order above.
Posted by Stephanie A. Mann at 12:30 AM