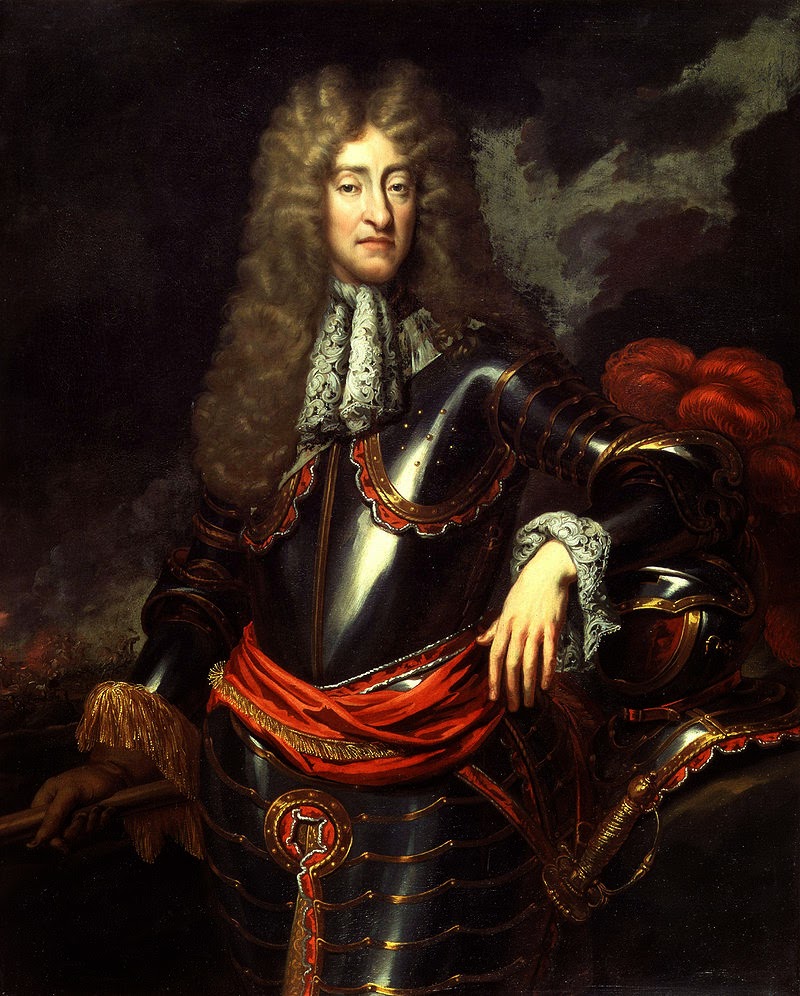 From Crisis Magazine, K.V. Turley writes about "The Last Catholic King of Ireland":

The King’s brother, the Duke of York, was now King James II of England and of Ireland, and James VII of Scotland. This passing of throne from one brother to another was not met with universal rejoicing, however, for James was Catholic. And one who had come to the Faith in adulthood through a path of reason and, of course, grace—a path that was as unpopular as it was to prove dangerous for him. But that was not the whole story. Whereas Charles had placated the oligarchy that since his return from exile had effectively ruled, James was made of different stuff. His was a character as straight as his brother’s had been strategic, it was this that was to be his undoing. As he ascended the throne, it is fair to say that traitors encircled him, a virtual vipers nest, who were ready to sell him to the highest bidder. Conveniently, and to that end, they did not have far to look.

Across the sea in Holland lived one of the oddest pairs ever to sit upon any throne in Europe: their names, William, Prince of Orange, and his spouse, the daughter of James, Mary. A strange woman who cried bitter tears on her wedding day, her husband’s manner and reputation were odder still. It was towards these that the whole treacherous cabal now crept. At the time its members were in the employ of James, no doubt with endless assertions of loyalty, whilst all the while searching for an opportunity to betray him. Despite protestations of fears about religion, this circle was really only ever interested in one thing: its own ambitions. It didn't take long before it found the basis on which to rally the mob and produce the coup d’état it longed for, ironically, wrapped in the guise of “Religious Liberty.”

Turley also describes James's conversion in exile after the failure of the Battle of Boyne:

By 1690, his libertine youth long since behind him, he turned inward. Soon after, in November of that same year, he was to be seen making pilgrimage to the Cistercian monastery of La Trappe, one of the most austere of all religious houses. There he sought out a hermit—a former soldier and man of the world who had shunned all for a life of solitude and silence in a forest near the monastery. The conversation that passed between the two left an indelible mark. When asked if there was anything the man missed of the world the reply was as blunt as it was thought provoking. And, needless to say, it was the king who left their brief exchange the more thoughtful. Later this was to be compounded by his stay at the monastery where the first chant he heard intoned was Psalm 118, its words of lament for this changing world and all its woes struck a chord for the Royal who sat listening. When he left the monks some days later, to those around him he was a changed man; one determined to live his Catholic faith in as heroic a fashion as he had observed in the cloisters of La Trappe.

Thereafter, this desire for sanctity was now to be lived out in the world as his prayer and reception of the Sacraments intensified. In addition, he took to the mortification of the flesh with a zeal (and an iron chain) that raised ironic smiles among the more worldly courtiers of Versailles, for this deposed King had become a penitent. Suddenly all his life, both the intensely personal vices he had struggled with since youth through to the very public calamity sealed at the Boyne, appeared to at last make sense. And as it did so, he understood that the loss of his realm was mysteriously the Will of God and with this knowledge, he resolved to spend what time was left him in prayer and penance.