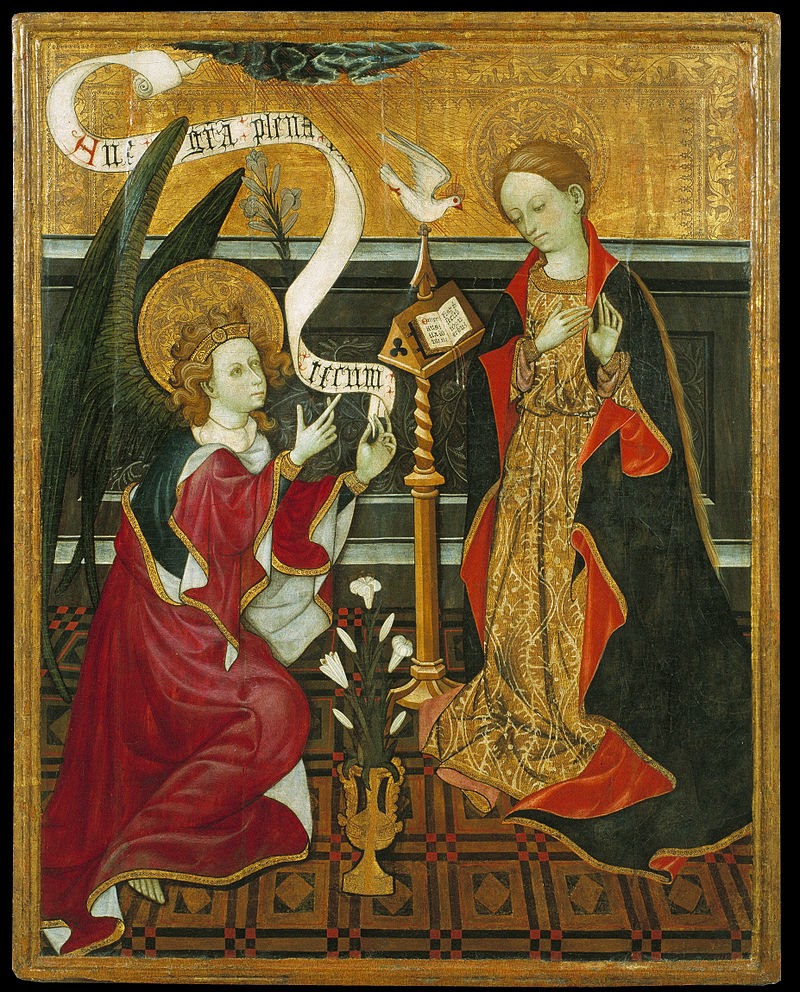 On March 25, 1586, St. Margaret Clitherow was pressed to death in the Toll Booth on the Ouse Bridge in the city of York--it was Good Friday that year. More about the Pearl of York here. She is one of the Forty Martyrs of England and Wales.

Today is also the Solemnity of the Annunciation of Our Lord, which was once a Holyday of Obligation (and should be again, I think). Only nine months until Christmas! John Mason Neale translated a hymn by Venantius Fortunatus, Quem terra, pontus, aethera thus:

The God whom earth, and sea, and sky,
Adore, and laud, and magnify,
Who o’er their threefold fabric reigns,
The virgin’s spotless womb contains.

The God whose will by moon and sun
And all things in due course is done,
Is borne upon a maiden’s breast,
By fullest heavenly grace possessed.

How blest the mother, in whose shrine
The great Artificer Divine,
Whose hand contains the earth and sky,
Vouchsafed, as in His ark, to lie!

Blest, in the message Gabriel brought;
Blest, by the work the Spirit wrought:
From whom the Great Desire of earth
Took human flesh and human birth.

All honor, laud, and glory be,
O Jesu, virgin-born, to Thee!
All glory, as is ever meet,
To Father and to Paraclete. 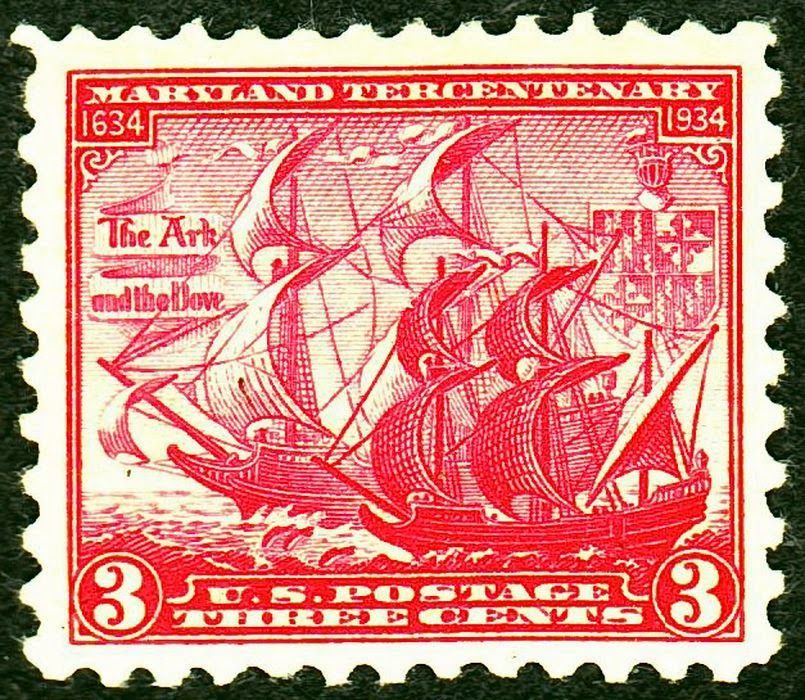 Here is a performance of the original Latin hymn in a composition by William Byrd.

Today is also Maryland Day, commemorating March 25, 1634 when the Ark and Dove (pictured left on a three cent stamp) landed in what is now St. Mary's County, Maryland. George Calvert, Lord Baltimore, a revert to the Catholic faith, founded a colony where Catholics could practice their faith as Protestants. More about Maryland Day here.

Finally, this is Tolkien Reading Day, celebrated every March 25 since 2003 by the Tolkien Society--March 25 is the date of the destruction of the Ring, and thus the Fall of Sauron. This Dominican blog unpacks more of the symbolism and significance of this day:

In a seemingly insignificant detail in one of the appendices of his masterpiece, The Lord of the Rings, J. R. R. Tolkien notes that the destruction of the One Ring and the defeat of Sauron took place on March 25. What might have led Tolkien to date the destruction of the ring with such precision? Being a devout Catholic, Tolkien most likely was subtly weaving into his work an ancient Christian tradition regarding the Solemnity of the Annunciation, the feast the Church celebrates today.

According to this tradition, the date of the Annunciation coincided with a number of significant events in salvation history. March 25 was not only the day on which Christ was conceived in Our Lady’s womb; it was also the day of the creation of the world, the day Adam and Eve fell, the day Abraham (nearly) sacrificed his son Isaac, the day the Israelites were set free from Egypt, and the day of the crucifixion. . . .

While Tolkien probably set the destruction of the ring on March 25th more for its association with the crucifixion than with the Annunciation, the two are intimately linked – the incarnation is ordered to the crucifixion (and, with it, the resurrection).

Tolkien’s use of this tradition illustrates an important aspect of the incarnation and the cross. While the destruction of the ring meant the defeat of Sauron, this did not put to an end all of Middle Earth’s troubles. The members of the fellowship still had work to do. Similarly, though the incarnation and the cross spell the defeat of Satan, we, too, have work to do. And like Frodo, our success will come not through earthly power, but by humility. For it was by the humility that characterized Mary, the New Eve, that she untied the knot of the first Eve, and it was by His humility that Christ overcame death (Phil 2:5-11). May she who is full of grace obtain for us the graces we need to participate in Christ’s humility and to obey Him in whatever tasks He gives us.
Posted by Stephanie A. Mann at 12:30 AM