The REAL Eleanor of Aquitaine 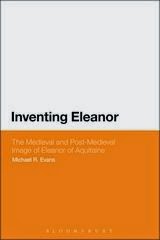 History Today posts this review of Inventing Eleanor: The Medieval and Post-Medieval Image of Eleanor of Aquitaine, by Michael Evans, published by Bloomsbury Academic:

Eleanor of Aquitaine (1124- 1204) has stood in the spotlight for eight centuries, but paradoxically the real Eleanor remains a shadowy figure. Duchess of Aquitaine, Queen of France and England, mother of two English kings, her achievements have been overlaid by successive washes of notoriety, glamour and spin, until separating fact from fiction has become a Herculean task.

In Inventing Eleanor, Michael Evans attempts that untanglement with panache. Examining the ideas, myths and legends surrounding Eleanor, he focuses on the historians and artists who have constructed an Eleanor very different from the 12th-century queen and sets out to discover how and why. The work considers the medieval primary sources before tracing the post-medieval development of Eleanor’s image to the present.

Inventing Eleanor is a fine addition to the Eleanor oeuvre. It has a scholarly focus, but it is written in a winning and readable style. Evans argues convincingly that Eleanor was ‘far from unique among 12th century royal and noble women’ and seeks to unravel how she acquired her false reputation for exceptionalism. He opines that her modern biographers must take a lot of the blame and that we, the public, would often rather believe colourful myth above prosaic truth. He explores the way in which Eleanor’s reputation has been distorted to suit the ideologies of particular historical periods and historians. The feminist movement of the late 20th century, for example, has spawned an interest in Eleanor as a female hero, exaggerating her influence, reinforcing her fabled exceptionalism.

According to the publisher:

Eleanor of Aquitaine (1124-1204), queen of France and England and mother of two kings, has often been described as one of the most remarkable women of the Middle Ages. Yet her real achievements have been embellished--and even obscured--by myths that have grown up over eight centuries. This process began in her own lifetime, as chroniclers reported rumours of her scandalous conduct on crusade, and has continued ever since. She has been variously viewed as an adulterous queen, a monstrous mother and a jealous murderess, but also as a patron of literature, champion of courtly love and proto-feminist defender of women's rights. Inventing Eleanor interrogates the myths that have grown up around the figure of Eleanor of Aquitaine and investigates how and why historians and artists have invented an Eleanor who is very different from the 12th-century queen. The book first considers the medieval primary sources and then proceeds to trace the post-medieval development of the image of Eleanor, from demonic queen to feminist icon, in historiography and the broader culture.

Here is an interview with the author, in which he notes how hard it is to correct myths of history. He is fighting another version of the Whig interpretation of history, in which authors like Amy Kelly, Thomas Cahill and others see 20th and 21st century feminist values in a thoroughly medieval woman.

Looks fascinating, but it's incredibly expensive! Almost $90.00 for the Kindle edition! The publisher certainly did not spend much money on the cover design--but it's an academic press I know. This is book for inter-library loan!
Posted by Stephanie A. Mann at 1:00 AM

Email ThisBlogThis!Share to TwitterShare to FacebookShare to Pinterest
Labels: Eleanor of Aquitaine, history, myths of history, the 12th century, the Middle Ages