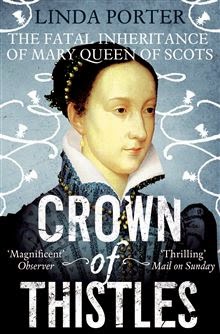 Deep as I am in Jessie Childs' God's Traitors, reading about the Babington Plot and the Vaux family connections to the eponymous plotter, and Mary Stuart's role in the plot to depose "the usurper" so she could be free and reign in England--reading about Linda Porter's new book about the Tudors and the Stuarts resonated immediately.

From the U.K. publisher, with the U.K. title:

Mary Queen of Scots fervently believed she had a right to the English throne - a belief that cost her her head. A vivid account of why she came to this belief from an acclaimed Tudor historian

The struggle between the fecund Stewarts and the barren Tudors is generally seen only in terms of the relationship between Elizabeth I and her cousin, Mary Queen of Scots. But very little has been said about the background to their intense rivalry. Here, Linda Porter examines the ancient and intractable power struggle between England and Scotland, a struggle intensified during the reigns of Elizabeth and Mary's grandfathers. Henry VII aimed to provide stability when he married his daughter, Margaret, to James IV of Scotland in 1503. But he must also have known that Margaret's descendants might seek to rule the entire island. Crown of Thistles is the story of a divided family, of flamboyant kings and queens, cultured courts and tribal hatreds, blood feuds, rape and sexual licence on a breath-taking scale, and violent deaths. It also brings alive a neglected aspect of British history - the blood-spattered steps of two small countries on the fringes of Europe towards an awkward unity that would ultimately forge a great nation. Beginning with the unlikely and dramatic victories of two usurping kings, one a rank outsider and the other a fourteen-year-old boy who rebelled against his own father, the book sheds new light on Henry VIII, his daughter, Elizabeth, and on his great-niece, Mary Queen of Scots, still seductive more than 400 years after her death. 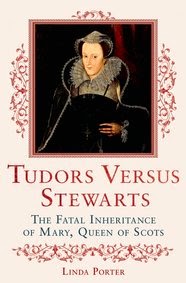 From the U.S. publisher with the U.S. title:
The war between the fertile Stewarts and the barren Tudors was crucial to the history of the British Isles in the sixteenth century. The legendary struggle, most famously embodied by the relationship between Elizabeth I and her cousin, Mary Queen of Scots, was fuelled by three generations of powerful Tudor and Stewart monarchs. It was the marriage of Margaret Tudor, elder sister of Henry VIII, to James IV of Scotland in 1503 that gave the Tudors a claim to the English throne—a claim which became the acknowledged ambition of Mary Queen of Scots and a major factor in her downfall.

Here is the story of divided families, of flamboyant kings and queens, cultured courts and tribal hatreds, blood feuds, rape and sexual license, of battles and violent deaths. It brings alive a neglected aspect of British history—the blood-spattered steps of two small countries on the northern fringes of Europe towards the union of their crowns. Beginning with the dramatic victories of two usurpers, Henry VII in England and James IV in Scotland, in the late fifteenth century, Linda Porter's Tudors Versus Stewarts sheds new light on Henry VIII, his daughter Elizabeth I and on his great-niece, Mary Queen of Scots, still seductive more than 400 years after her death.
It's interesting to note, not only the change in title for the U.S. audience, but the subtle changes in wording for the U.S. blurb (fertile vs. fecund!)--not to mention the different spellings of the same word (licence/license). The original title is much more evocative--the "crown of thistles" Mary of Scotland inherited contains an allusion to the "crown of thorns"; but I presume the publishers judged that U.S. audiences wouldn't get the meaning, or know that the thistle is the symbol of Scotland as the shamrock is the symbol of Ireland.
I also find it so fascinating now that there is a school, almost, of Tudor-Stuart biographers and historians available to review each other's works: Linda Porter, Leanda de Lisle, John Guy, Alison Weir, Giles Tremlett, etc. Here's a link to Leanda de Lisle's review of Crown of Thistles, summarized thusly:
In giving us the history of family rivalry to Mary’s reign and fall, Linda Porter has found a fresh approach to her biography, and told it with grace and humanity. She brings alive a thrilling story of cultured courts and violent deaths, of ambitious kings and tragic queens: executed on Elizabeth’s orders in 1587, Mary’s family’s past had indeed proved a fatal inheritance.
Posted by Stephanie A. Mann at 12:30 AM