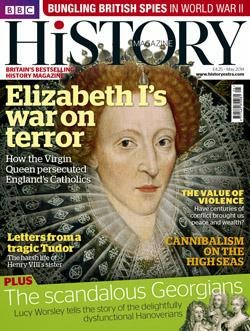 I purchased the May issue of BBC History at our local Barnes & Noble bookstore--the only reason we go to our local B&N is for magazines (or CDs and DVDs), of course, with Eighth Day Books in town. The cover story is by Jessie Childs, based on her book God's Traitors: Terror and Faith in Elizabethan England and the article includes a sidebar on the plots that some Catholics did support to remove the queen from the throne and bring Mary, Queen of Scots or another Catholic claimant to rule in England.

But the story of Blessed John Storey also indicates that Elizabethan authorities saw plots were there were no plots. John Storey had left England, renounced his allegiance (the closest thing in the 16th century to renouncing citizenship), started a new life, and entered the service of King Philip II of Spain--there is no indication of any plotting against Elizabeth I on John Storey's part. Elizabeth's agents violated the sovereignty of another ruler to enter the Spanish Netherlands and entrap, then kidnap Storey, and bring him to England to torture, try, and execute him. In the wake of the Northern Rebellion, Elizabeth was certainly tracking down any associate of the rebel leaders, however tenuous.

Blessed John Story or Storey experienced and was involved in all the religious changes of the Tudor Dynasty during each reign: Henry VIII, Edward VI, Mary I, and Elizabeth I. He endured imprisonment and exile, torture and execution, success and failure at the University of Oxford, in Parliament, and at Court:

John Story or Storey was born in northern England in 1504 and educated at the University of Oxford. He became a Doctor of Law and served at the President of Broadgates Hall (now Pembroke College) from 1537 to 1539.

John might have fallen away briefly from the Catholic Church or at least decided that he could accept the king’s control of the Church in England, for he did take Henry VIII’s Oath of Supremacy. After becoming a member of the House of Commons for Hindon in Wiltshire in southwest England in 1547, he seems to have reverted. (He also got married to a woman named Joan in 1547.) In 1549 he protested against the Act of Uniformity introduced in Parliament by the government of young king Edward VI. This Act promulgated Thomas Cranmer’s new Book of Common Prayer as the sole legal form of worship in England.

This law was controversial in Parliament and John Storey spoke against it—and against the boy king. Because he cried out “Woe unto thee, O land, when thy king is a child,” the House of Commons imprisoned him.

Eventually, House of Commons released John Storey; he and his family went into exile in Louvain in the Low Countries under the rule of Spain, now in Belgium. There he joined the faculty at the University of Louvain and the community of English Catholic exiles, including William Rastell, Thomas More’s nephew and publisher.

In August of 1533, Storey and his family returned to England after Edward VI died and Mary, Henry VIII and Katherine of Aragon’s Catholic daughter succeeded to the throne in spite of the attempt to supplant her by the Protestant Lady Jane Grey. Story went back to Oxford as Regius Professor of Law but then took on important duties in the revived Catholic Church, serving as Chancellor for the dioceses of London and Oxford, and Dean of the Arches, the ecclesiastical court of the Archbishop of Canterbury. In his role as Chancellor for the Bishop of London, Edmund Bonner, he took part in heresy trials. He also served as proctor or representative for Queen Mary I at the trial of Thomas Cranmer in Oxford and joined efforts to control the publication of heretical books in several dioceses.

When Mary I and Reginald Pole, Archbishop of Canterbury, died on November 17, 1558, Storey, like other Catholics in England, waited to see what direction Elizabeth I would take in religion. Her first Parliament began to introduce bills leading to the establishment of the Church of England, and John Storey found himself under attack for his opposition and for his work during Mary I’s reign. In May of 1560 he was arrested and imprisoned in the Fleet, from which he escaped briefly, being recaptured and taken to Marshalsea Prison in April or May of 1562. He escaped from Marshalsea before he could be confronted with the taking of Elizabeth I’s Oath of Supremacy and fled again to Louvain, leaving everything he owned behind in England. His family joined him in exile again and the Duke of Alba offered him financial assistance and a position as a customs official. John Storey renounced his allegiance to Elizabeth I and placed himself in the service of Philip II of Spain, ruling in the Spanish Netherlands. He remained there for seven years.

English agents used his position as customs agent to capture Storey and return him to England. William Cecil, Elizabeth I’s Secretary of State set a trap by having spies pose as refugees from England seeking Spanish protection in the Netherlands. Storey went aboard a ship in Antwerp to search it and the ship sailed to Yarmouth where he was placed under arrest. In London he was tortured and held there from August of 1570 until his trial on May 26, 1571 in Westminster Hall.

St. Edmund Campion attended this trial at which Storey protested that he was a subject of the King of Spain and therefore not accountable to English treason laws. Accused of plotting the death of Elizabeth I, he refused to plead. The only evidence against him was his association with the Norton family who had been part of the Northern Rebellion of 1569, when Catholics rose up against Elizabeth’s religious policies. On April 27, 1570 Pope Pius V had excommunicated Queen Elizabeth in the Bull, Regnans in Excelsis, which also released her subjects from any allegiance to her. Certainly a former English subject, living in exile under the protection of one of England’s enemies did not stand a chance against the presumption of his guilt. The fact that he had opposed religious changes in Parliament during two reigns and participated in heresy trials in another compounded his danger. The verdict was a foregone conclusion and Storey was sentenced to be hung, drawn, and quartered.

St. Edmund Campion’s presence at this trial confirmed him in his reversion to Catholicism as he was on his way to join the English exiles in Douai to study for the priesthood. Evidently he did not witness John Storey’s execution on June 1, 1571 at Tyburn in London. Even though Story was 70 years old, the execution was carried out as brutally as possible—and he was posthumously mocked in pamphlets for having cried out in agony.

Philip II arranged for his widow and family to receive a pension—and his son John became a priest. The elder John Storey was beatified in 1886 by Pope Leo XIII. Blessed John Storey offers a great example--his willingness to stand up for the Catholic faith in spite of repeated imprisonment and exile, culminating in his final capture, torture, trial and execution. The fact that his example influenced one of the greatest of the Elizabethan era martyrs, St. Edmund Campion, demonstrates what a model of faithfulness and fortitude he was and is.
Posted by Stephanie A. Mann at 12:30 AM