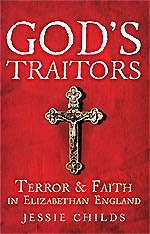 Rather like Adrian Tinniswood with The Verneys: A True Story of Love, War, and Madness in Seventeenth Century England, which focused on that family's reactions to events like the English Civil War and Interregnum,  in God's Traitors: Terror & Faith in Elizabethan England Jessie Childs focuses on the Vaux family of Harrowden Hall (and connected families like the Treshams of Rushton) and how they, remaining true to their Catholic faith, responded to the ever-tightening restrictions on recusant Catholics during Elizabeth I's reign--and how much they knew about the Gunpowder Plot of 1605.

One great feature of the design of this book, which includes two insets of color images, other illustrations, a list of principal characters, and a family tree, is the map of the Midlands of England with the Catholic houses identified in each county: Staffordshire, Worcestershire, Warwickshire, Leicestershire, and Northamptonshire. Seeing the distances (if not the terrain) between the houses, I could imagine the missionary priests moving from house to house, celebrating the Sacraments, keeping ahead of the government pursuivants. I could also imagine the government pursuivants, going from house to house, hoping to catch a priest!

By telling the story of Vaux family, as each generation continues the family's faithfulness to the Catholic Church, Childs retells stories familiar to me, of St. Edmund Campion and Father Robert Persons, St. Robert Southwell, Fathers Henry Garnett and John Gerard, and other priests and martyrs, from a different angle: how the Vaux family had sheltered and assisted the priests.

As Childs describes each Vaux generation's response to recusancy, the tension and the danger mount: fines, arrests, imprisonment, debt, danger, conflict within the extended family, and death. Trying to find a way to practice his faith and yet be an Englishman proved exhausting for William the second Baron Vaux. Recusant Catholics could "either obey their Queen and consign their souls to damnation", as Childs says, "or obey the pope and surrender their bodies to temporal punishment". His son Henry and daughters Anne and Eleanor and daughter-in-law Eliza would be even more courageous, leading the underground network of safety for the missionary priests. The later generations of Vauxes--further and further separated from how the Catholic faith had once been practiced in England--grew more and more desperate as they found their choices so limiting: unable to take part in the leadership of their country, they fled to the Continent as mercenaries, like Ambrose, the black sheep of the family.

The Vauxes are always on the edges of the conspiracies against Elizabeth I (the Ridolfi Plot, the Babington conspiracy, the Throckmorton Plot)--and thus William Vaux spent so much time answering questions, along with his brother-in-law Sir Thomas Tresham, paying fnes, enduring imprisonment and house arrest. But at the end of the book, the Gunpowder Plot attempt to blow up Parliament with King James I, his family, and all the Lords and Commons, sums up the entire struggle. Anne Vaux feared that young men she knew well like Robert Catesby were plotting something horrible and she wanted Father Henry Garnet to tell them not to go forward with their plans. Did Father Garnet do enough? did he ask the right questions? respond forcefully enough to tell Catesby and Digby et al not to pursue whatever plot they had in mind? Those were questions he asked himself while in prison and even during his questioning. Although he did not instigate the plot or encourage the plot--he knew about the Gunpowder Plot and he did not report it to the authorities, citing the seal of the confessional.

In the Epilogue, Childs continues the story of the Vauxes: the sisters Anne and Eleanor and their sister-in-law Eliza continue their good works, focused now on the children to be raised in the Catholic faith. The family endures the long Eighteenth century and then finally enjoys Emancipation and freedom. One of the best details of this after story is that the nine Baron Vaux was Father Gabriel Gilbey, O.S.B. and took his seat in the House of Lords in 1962, 403 years after the last Benedictine served in the House (I presume that could be John Feckenham, the last abbot of Westminster Abbey).

Alice Hogge in God's Secret Agents: Queen Elizabeth's Forbidden Priests and the Hatching of the Gunpowder Plot (2005) described the lives and deaths of the missionary priests who studied abroad and returned to England, branded as traitors for their priesthood, in her build-up to the Gunpowder Plot and its aftermath. It could almost serve as the companion volume to Childs' great story of the Vaux family. By focusing on the noble Vaux family, the lay men and women who struggled to remain true to their Church and to their nation, however, Childs has given us a great story of faithfulness and endurance. I cannot recommend God's Traitors highly enough: it is well-narrated and her analysis is always balanced and insightful.

Please note that I received this review copy from the author, with the only expectation being that I would read it and review it honestly.
Posted by Stephanie A. Mann at 12:30 AM