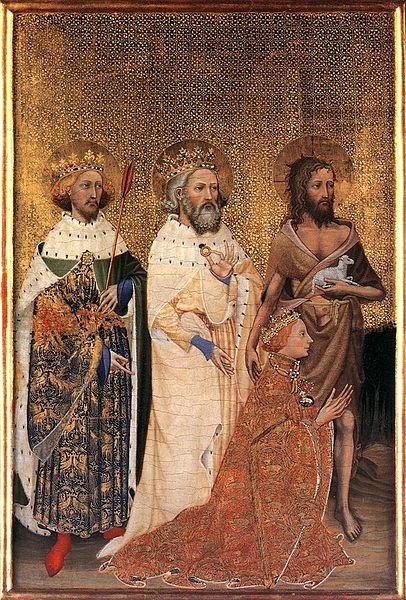 Pope Francis wisely featured St. Edward the Confessor (in the center of the left half of the Wilton Diptych, behind Richard II) in his gifts to both Queen Elizabeth II and her great grandson Prince George. St. Edward is a shared saint between the Church of England and the Catholic Church--primarily because he was canonized by Pope Alexander in 1161 and his cult extended to the entire Catholic Church by Blessed Pope Innocent XI in 1679 (!) According to the Vatican's report of their meeting, "The Pope . . . presented the Queen with a replica of a decree from the Vatican archives, dating from 1679, by which Pope Innocent XI extended the veneration of St Edward the Confessor to the Universal Church, establishing his feast day on October 9th." (Except that sources I found say his feast day is October 13, since that is the date of the translation of his relics to Westminster Abbey.) It is interesting to think that Blessed Pope Innocent promoted this feast while Catholic priests in England were being executed because of Titus Oates' "Popish Plot". It's also important to remember that Innocent did not approve of Catholic King James II's methods in promoting Catholicism in England--nor of James's closeness with King Louis XIV of France (and probably not of Charles II's, either).

Queen Elizabeth and Prince Philip faced a greater challenge in giving ceremonial gifts to Pope Francis: what do you give to the man who does not really want anything? In keeping with the informal nature of the visit, they gave him a hamper "stuffed with goodies from her royal estates: honey from the gardens of Buckingham Palace, venison, beef and some best bitter from Windsor Castle, cider, apple juice and a selection of chutneys from Sandringham and some shortbread and whiskey from the Balmoral estate in Scotland."

We should recall that Pope Emeritus Benedict XVI and then Archbishop of Canterbury Rowan Williams knelt together in prayer before the tomb of St. Edward the Confessor on Friday, September 17, 2010 during the ecumenical Evensong in Westminster Cathedral:

Pope Benedict, in his address, said he was grateful for his welcome and described his visit as a “pilgrimage”, by the Successor of St Peter, to the tomb of St Edward the Confessor. He said King Edward was “a model of Christian witness” and “an example of that true grandeur to which the Lord summons his disciples in the Scriptures we have just heard: the grandeur of a humility and obedience grounded in Christ’s own example”.

St. Edward the Confessor, so-called because he was not a martyr, is the only English king to be proclaimed a saint.
Posted by Stephanie A. Mann at 12:30 AM