Crowland Abbey: A Pilgrimage and a Poem 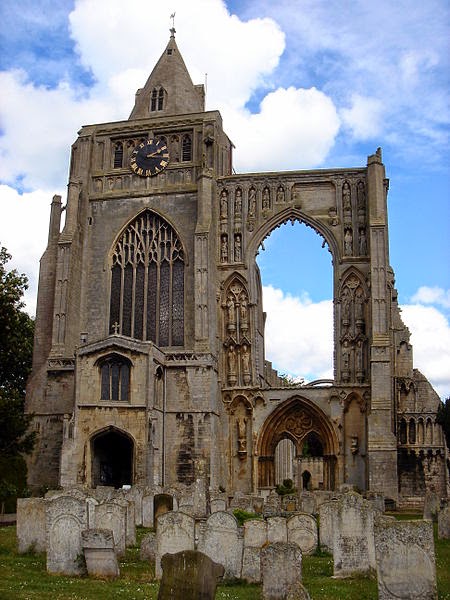 A Clerk of Oxford posts a marvelous remembrance of a pilgrimage to the ruins of Crowland Abbey in Lincolnshire. John Clare, the 19th century "labouring-class poet" wrote a sonnet about the abbey ruins:

IN sooth, it seems right awful and sublime
To gaze by moonlight on the shattered pile
Of this old Abbey, struggling still with Time,
The grey owl hooting from its rents the while;
And tottering stones, as wakened by the sound,
Crumbling from arch and battlement around,
Urging dread echoes from the gloomy aisle,
To sink more silent still. ­The very ground
In Desolation’s garment doth appear,
The lapse of age and mystery profound.
We gaze on wrecks of ornamented stones,
On tombs whose sculptures half erased appear,
On rank weeds, battening over human bones,
Till even one’s very shadow seems to fear.

Crowland Abbey was dedicated to the Blessed Virgin Mary, St. Bartholomew, and St. Guthlac, a late 7th century/early 8th century saint who came to Crowland on St. Bartholomew's Day in 699. The last abbot of Crowland and 28 monks surrendered the abbey to Cromwell's Visitors on December 4, 1539. According to this site, the last abbot had a rather contentious rule:

The last abbot, John Wells, or Bridges, ruled the house from 1512 until 1538. The visitation of Atwater, bishop of Lincoln, in 1519, shows that he was very arbitrary and unpopular. He then kept in his own hands the emoluments of the cellarer and receiver, so that they were officers only in name. In consequence the monks got neither soup nor pudding. Sick monks who were away with leave could not get the customary allowance of food and drink. One very old monk was denied the privileges which were his due. The bishop ordered the abbot to make full amends, and also to remove the janitor who spent much of his time in the town of Crowland, and sent pilgrims to Walsingham astray.

An anxious desire to appease Cromwell and Henry VIII appears in the abbot's correspondence in 1534, 1539, and 1539. Demands were made on him for leases and grants which were beyond his power to satisfy. There is no record of any discussions among the monks about the progress of affairs, and they certainly swallowed any scruples which they may have had. In June, 1534, the abbot and thirty-two monks subscribed to the royal supremacy. On 25 March, 1537, the abbot sent a present of fen fish to Cromwell, begging him 'to be good and favourable lord' unto him and his poor house. Between 1535 and 1539 he granted over thirty small annuities, some of them possibly for sums of ready money with the object of providing for the future.

John Wells received a generous pension: £133 6s. 8d, while the rest st of the monks received £5 to £10 a year. The nave and the aisles of the monastery church were saved to become the parish church in Crowland, while the monastery,  as well as the crossing, chancel, and transepts were destroyed. As usual, A Clerk of Oxford's post provides great detail and excellent pictures.
Posted by Stephanie A. Mann at 12:30 AM

Email ThisBlogThis!Share to TwitterShare to FacebookShare to Pinterest
Labels: A Clerk of Oxford, abbeys, Benedictines, Crowland Abbey, John Clare, poetry, The Dissolution of the Monasteries