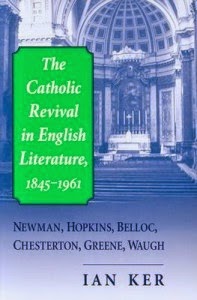 Assembling a sestet of writers whose dates describe an arc between the Oxford Movement and the first stirrings of the Second Vatican Council, Ker explores a rare moment when Catholics seemed to dominate a world generally inhospitable to their moral and sacramental preoccupations. These writers are a varied bunch—so miscellaneous, in fact, that it is hard to imagine them together anywhere other than in a church, and a very broad church at that. As individuals complex and contradictory, as a group they seem so eccentric that even shared Catholicism strains to contain them.

This is a fine book, warmly recommended, full of sharp insight and telling quotation. The reader will not concur with every judgment (which is, indeed, one of the book’s pleasures) and one or two editorial errors creep in, but these niceties apart, it is a highly accomplished piece of work. Learned, witty, and humane, it will give much pleasure to specialist and generalist alike. . . .

They had an easy intimacy with mystery, these six, as all Catholics must have who take their church seriously. With Chesterton, for instance, the intimacy was with the mystery of goodness. With Greene, on the other hand, it was with the mystery of evil. Think of Chesterton’s insight in Orthodoxy that the task of the philosopher—of every person—is to be at once at home in the world yet utterly amazed by it. One must “somehow find a way of loving the world without trusting it; somehow one must love the world without being worldly.” “We do not fit into the world,” he said, but see, rather, “the unnaturalness of everything in the light of the supernatural.”

The same apprehension of the sheer gift and goodness of being, the strange loveliness of all creation, permeates the work of Hopkins, great poet of landscape and “inscape.” But think, too, of Greene, wrestling with malevolence and losing. His derelict characters reach their private Golgothas too broken even to hope for redemption, often refusing when freely offered it at the last. Greene in his own life came to resemble them, once for instance declining an invitation from Padre Pio (now a saint) because he knew such a meeting would require him to reform his life. He called his memoirs Ways of Escape. Francis Thompson’s Hound of Heaven should have reminded him there is no escape.

Yet in a more important sense the Church is not prison but liberation. It is the way of escape—from the cell of the self, from the solipsist nightmare, from the grubbiness of materialism, from the overwhelming fact, in every age, of sin and sorrow. For Hopkins, the church was a heaven-haven. For Belloc, it was freedom from “the isolation of the soul.” For Chesterton, it was salvation from being a child of his own time. For Waugh, it was “an island of order and sweetness in an ocean of rank barbarity.” For Newman, it was emergence from darkness to light. Without God, he wrote, “we are pent up within ourselves. We need a relief to our hearts…that they may not go on feeding upon themselves; we need to escape from ourselves to something beyond.” That “something beyond” is God. It is also, mysteriously, His Church on heaven and earth. Examining six of its members, Father Ker has written a splendid book.