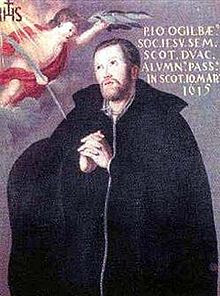 According to this CNA story, Emeritus Pope Benedict XVI encouraged devotion to St. John Ogilvie in February of 2010, before his visit to Scotland and England in September that year--then mentioned him again at the Mass at Bellahouston Park in Glasgow the day of his arrival:

March 10 is the liturgical memorial of Saint John Ogilvie, a 16th-and 17th-century Scotsman who converted from Presbyterianism to Catholicism, served as a Jesuit priest, and died as a martyr at the hands of state officials. St. John was executed for treason, refusing to accept King James I’s claim of supremacy over the Church. Pope Paul VI canonized him in 1976, making him Scotland’s first canonized saint for several hundred years [since 1250!]

In February 2010, during a visit to Rome by the Scottish bishops’conference, Benedict XVI asked the bishops to promote devotion to St. John Ogilvie among priests – since the Jesuit martyr had been “truly outstanding in his dedication to a difficult and dangerous pastoral ministry, to the point of laying down his life.” Later that year, during the Scottish segment of his U.K. visit, the Pope again encouraged priests to look to the saint’s “dedicated, selfless and brave” example.

The Jesuit Vocations website in Great Britain describes his early life and conversion:

John Ogilvie was born in 1579 and brought up in the Calvinist tradition. He was six or seven years old when Mary Queen of Scots died on the scaffold. He grew up as a child in a Scotland which had rejected her, and with her the old faith of his fathers. At the age of twelve he crossed to the continent in pursuit of education. But travelling in Europe broadened his mind, and he decided to become a Catholic, ending up at a Jesuit college in Austria. A year later, in 1599, he entered the Jesuit novitiate, and followed the normal Jesuit programme of noviceship, philosophy, and school teaching, in Vienna, before he was ordained in Paris in 1610.

After his capture in Glasgow, he endured great tortures:

The archbishop hit John Ogilvie in the face and said, "you are over bold to say your Masses in a reformed city," to which the Jesuit, replied, "You act like a hangman, not a bishop, in striking me." He was then beaten up by the archbishop's men, and taken off to prison and interrogation, but he never lost his spirit.

The cell they put him in stank, his feet where weighed down, and he was tortured before being taken to Edinburgh to appear before a council appointed by King James I of England (James VI of Scotland). There he was tortured by sleep deprivation for nearly ten days until December 22, but still refused to divulge names of those he had worked with or lived with. So he was sent back to prison in Glasgow, where he managed to write an account of what had happened to him since his arrest, and have it smuggled out and sent to his Jesuit superior.

His final interrogation was in January, when King James who considered himself a theologian and had taken an interest in the case, had devised some questions for him, the answer to which must be either the denial of the pope's supremacy and the assertion of the king's in religious matters, or must condemn him for treason. John Ogilvie replied that only the pope, and not the king, had power in religious matters, and also that the pope could both excommunicate and depose the king. When the king read these responses he gave orders that John was to be tried on March 10 and executed if he would not change.

At 11 a.m. at Tollbooth in Glasgow John went on trial for high treason. He was found guilty by lunchtime, and executed at 4 p.m. He kissed the scaffold as he went, and spent some time in prayer, then was pushed off the ladder Since he did not die immediately, the hangman pulled on legs to finish the agony. Unusually, and despite the sentence he had been given, his body was not quartered but buried in a criminal’s graveyard.

The CNA story offers these further details of his execution:

Attempts to ply John with bribery – in exchange for his return to Protestantism, and his betrayal of fellow Catholics – continued even as he was being led to his execution. His own defiant words are recorded: for the Catholic faith, he said, he would "willingly and joyfully pour forth even a hundred lives. Snatch away that one which I have from me, and make no delay about it, but my religion you will never snatch away from me!"

Asked whether he was afraid to die, the priest replied: “I fear death as much as you do your dinner.” St. John Ogilvie was executed by hanging on March 10, 1615.

As a last gesture before his hanging, St. John had tossed his Rosary beads into the crowd where they were caught by a Calvinist nobleman. The man, Baron John ab Eckersdorff, later became a Catholic, tracing his conversion to the incident and the martyr’s beads.

A prayer for the courage to imitate St. John Ogilvie:

God our Father, fountain of all blessing, We thank you for the countless graces that come to us in answer to the prayers of your saints. With great confidence we ask you in the name of your Son and through the prayers of St John Ogilvie to help us in all our needs.

Lord Jesus, you chose your servant St John Ogilvie to be your faithful witness to the spiritual authority of the chief shepherd of your flock. Keep your people always one in mind and heart, In communion with [Francis] our Pope, and all the bishops of your Church.

Holy Spirit, you gave St John Ogilvie light to know your truth, wisdom to defend it, and courage to die for it. Through his prayers and example bring our country into the unity and peace of Christ’s kingdom. Amen.
Posted by Stephanie A. Mann at 2:08 AM