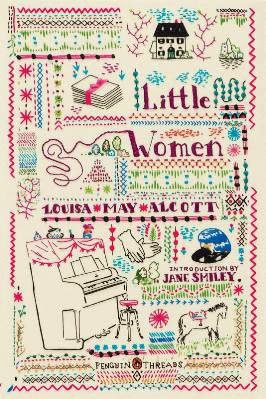 Louisa May Alcott died on March 6, 1888. I read my first copy of Little Women (actually an abridged edition of  Little Women and Good Wives from Whitman Classics) so much when I was a child that the book fell apart. Sections of it fell out and I had to use a rubber band to keep the book together! (The image above is the cover of a recent Penguin edition.)

I also read Little Men, Jo's Boys, Eight Cousins, Rose in Bloom, Under the Lilacs, Jack and Jill, Hospital Sketches, and An Old Fashioned Girl. Several years ago, I investigated her Gothic novels and other fiction: A Long Fatal Love Chase (guess how that book ends!), Behind a Mask, The Inheritance, and Moods.

In Little Women and a few of the other children's books I noticed how Alcott sometimes used Catholic devotions. If you read Little Women you might remember when Amy has to stay at Aunt March's mansion while Beth is home ill with scarlet fever. Aunt March's French maid Esther tells her a little about the Rosary and urges Amy to set aside a place and take time every day for some meditation and prayer. Amy does pray in her chapel, but certainly does not use the Rosary Esther gives her, "feeling doubtful as to its fitness for Protestant prayers."

Rose in Bloom contains an extended discussion of saints and devotion when Rose and her cousin Charlie debate the merits of St. Francis of Assisi and St. Martin of Tours:


"Some of my saints here were people of one idea, and though they were not very successful from a worldly point of view while alive, they were loved and canonized when dead," said Rose, who had been turning over a pile of photographs on the table and just then found her favorite, St. Francis, among them.

"This is more to my taste. Those worn-out, cadaverous fellows give me the blues, but here's a gentlemanly saint who takes things easy and does good as he goes along without howling over his own sins or making other people miserable by telling them of theirs." And Charlie laid a handsome St. Martin beside the brown-frocked monk.


Rose looked at both and understood why her cousin preferred the soldierly figure with the sword to the ascetic with his crucifix. One was riding bravely through the world in purple and fine linen, with horse and hound and squires at his back; and the other was in a lazar-house, praying over the dead and dying. The contrast was a strong one, and the girl's eyes lingered longest on the knight, though she said thoughtfully, "Yours is certainly the pleasantest and yet I never heard of any good deed he did, except divide his cloak with a beggar, while St. Francis gave himself to charity just when life was most tempting and spent years working for God without reward. He's old and poor, and in a dreadful place, but I won't give him up, and you may have your gay St. Martin if you want him."

"No, thank you, saints are not in my line but I'd like the golden-haired angel in the blue gown if you'll let me have her. She shall be my little Madonna, and I'll pray to her like a good Catholic," answered Charlie, turning to the delicate, deep-eyed figure with the lilies in its hand.

"With all my heart, and any others that you like. Choose some for your mother and give them to her with my love."

So Charlie sat down beside Rose to turn and talk over the pictures for a long and pleasant hour. But when they went away to lunch, if there had been anyone to observe so small but significant a trifle, good St. Francis lay face downward behind the sofa, while gallant St. Martin stood erect upon the chimneypiece.


And later in the same novel, one of Rose's other cousins, Mac, compares Rose to the Blessed Virgin Mary:

"Lead Rosa--I'm going to take this child home, and if Uncle is willing, I'll adopt her, and she shall be happy!" cried Rose, with the sudden glow of feeling that always made her lovely. And gathering poor baby close, she went on her way like a modern Britomart, ready to redress the wrongs of any who had need of her.

As he led the slowly stepping horse along the quiet road, Mac could not help thinking that they looked a little like the Flight into Egypt, but he did not say so, being a reverent youth--only glanced back now and then at the figure above him, for Rose had taken off her hat to keep the light from baby's eyes and sat with the sunshine turning her uncovered hair to gold as she looked down at the little creature resting on the saddle before her with the sweet thoughtfulness one sees in some of Correggio's young Madonnas.

These references to saints and Madonnas coming from a Unitarian Universalist are rather surprising. Certainly when you know more about St. Martin of Tours than Rose (or Alcott), the contrast she and Charlie see between them is confusing. St. Martin of Tours, hermit and then bishop, certainly spent his days after that one gesture in the same efforts as St. Francis of Assisi, whom Alcott mistakenly calls a monk (when he was a friar). Notice too the emphasis on charity and works. Alcott's novels for young girls are filled with calls to charity for the poor, efforts for the abandoned and the orphaned. As this site notes, Alcott's Unitarian background emphasized duty far above the "outward forms and rite of religion":

When Louisa May Alcott was a young woman trying to find work in Boston, she met the Rev. Theodore Parker, a Unitarian minister. He and his wife were very helpful to her. She attended his Sunday Services and his evening discussion groups. Louisa May Alcott's [1888] biographer, Ednah D. Cheney, writes the following about Louisa's religion:

"In her journal at this time she speaks of her religious feelings, which the experiences of grief and despair and reviving hope had deepened. Louisa Alcott's was a truly religious soul; she always lived in the consciousness of a Higher Power sustaining and blessing her, whose presence was revealed to her through Nature, through the inspired words of great thinkers and the deep experiences of her own heart. She never led her life as an isolated possession which she was free to use for her own enjoyment or glory. Her father truly called her 'Duty's faithful child', and her life was consecrated to the duty she recognized as specially hers. But for outward forms and rites of religion she cared little; her home was sacred to her, and she found her best life there. She loved Theodore Parker, and found great strength and help from his preaching, and afterward liked to listen to Dr. Bartol; but she never joined any church."

Since she did not practice the ritual aspect of religion--not joining any church--Alcott unfortunately did not understand Catholic devotion. She depicts a rather romanticized and aesthetic view of Catholicism, at least when reflecting on prayers and devotions. Nevertheless, I enjoyed her books very much when I read and re-read them so many years ago.
Posted by Stephanie A. Mann at 12:30 AM