The English Reformation and the Wars of the Roses 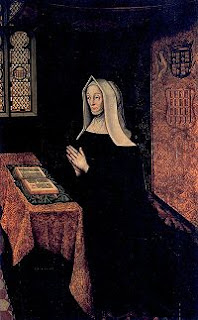 Leanda de Lisle, author of After Elizabeth, The Sisters Who Would Be Queen, and Tudor: Passion. Manipulation. Murder. The Story of England's Most Notorious Royal Family, visited this blog when I posted a link to her article on Anne Boleyn's execution with a sword and included a link to her article about Margaret Beaufort and her depiction in The White Queen, a BBC mini-series based on the Philippa Gregory book. The article reflects on how later generations, looking back on history through the lens of the English Reformation and the ongoing mistrust of Catholics in English Society, regarded Henry VII's mother with great suspicion, even shifting the blame for the murder of the Princes in the Tower from Richard III to Margaret Beaufort:

Richard showed no more inclination than Edward IV to allow Henry Tudor home but when the princes vanished that summer and rumours emerged that Richard had ordered their deaths Margaret saw an opportunity. She suggested to the mother of the princes - the "White Queen", Elizabeth Woodville - that she agree to marry her eldest daughter to Henry Tudor. Edwardian loyalists could then combine with remaining Lancastrians to overthrow Richard and make Henry king.

Less than two years later Richard III was killed in battle at Bosworth and Henry Tudor was crowned. Margaret - the Red Queen - would gain huge political influence and become one of the richest women in England. Clearly she had benefited from the disappearance of the princes but it would not be until 110 years after her death that she would be accused of child murder. The accusations first arose only during the reign of witch-burning misogynist James I. This was the era of the Stuarts, the Tudor line was defunct and so it was possible to re-assess Henry Tudor's enemy Richard III in a more positive light. That meant finding someone other than Richard responsible for the disappearance of his nephews. Cases in which children disappear are haunting and no one has forgotten the story of the Princes in the Tower.

Margaret was an easy target, in part because of the praise that had been lavished on her by her priestly confessor John Fisher. England had undergone the Reformation. Stuart England was thoroughly Protestant and Margaret's Catholic spirituality was now condemned, while her intelligence and toughness of character were regarded with equal suspicion.

In 1646 conman George Buck, who was passing off a history composed in 1619 by a great uncle as his own, published his uncle's accusation that Margaret was a "subtle and politic lady" who had sought to kill the princes with poison and sorcery to clear the way for Henry. As we see in the novels of Philippa Gregory and the BBC's White Queen, it is as a child murderer that she is being portrayed again.

Read the rest here. It's a wonderful day when an author like Leanda de Lisle notices your blog! I've haven't read her Tudor history, or her depiction of Margaret Beaufort, but here is an article from History Today by Michael K. Jones, author of The King's Mother that provides a detailed analysis of her life and character, including this conclusion which refers to St. John Fisher's memorial of his benefactor:

There are other features of this tender icon painted by Fisher which appear there only dimly, but more strongly in the reminiscences of Henry Parker. He pictures her sitting one New Year's Day under a cloth of state with her guests, a figure comparable for him with an Anglo-Saxon ruler, Elfleda Lady of the Mercians, or with Matilda wife of Henry I. Both of those led lives made politcally important by marriage and were symbols of piety and justice, but were also of strong passions and active characters. We get a glimpse of this side of Lady Margaret in Fisher's recollection of her saying often that if the Christian princes would war upon the enemies of Christ's faith, she would gladly go with them to wash their clothes, for the love of Jesus. Her tears of devotion, like those shed at her son's coronation, were perhaps signs of an intense nature concentrated upon its chosen aims. The aims were those demanded not only by her loyalty to God but to her son and the security of the royal house. It has been suggested that once at least her concern for wealth and power overcame her conscience: she neglected to fulfil a trust left by Cardinal Beaufort for the benefit of St Cross Hospital Winchester, although it clearly affected part of her estates.

Lady Margaret was, after all, the victim of politics from an early age: a prize passed from Suffolk to Edmund Tudor, even if she was able to accept her marriage with the latter as God's will. She learnt painfully during the dangerous years of war and of Edward IV's peace how to safeguard her interests and those of her son. She was a mature conspirator under Richard III, ready to suffer disaster before Henry's final triumph. Margaret, translator of The Mirror of Gold and inspirer of Henry Watson's translation of The Ship of Fools, had learnt the themes of reversal and penitence in a practical school. She was imbued with the courtly military ideals of her time; the recipient of a papal indulgence for her contributions to war against the Turks, the first book she commissioned from William Caxton in 1489 was of 'the noble acts and feats of war by a noble and victorious prince named Blanchardin... for the love of a noble princess called Eglantine'. As a patron, the employer of Caxton, Wynkyn de Worde and Pynson, and early helper of Skelton, she was for England a figure of Renaissance magnificence. Her epitaph was composed by Erasmus and her most moving likeness is the effigy sculpted by Torrigiano. Her great achievement was the self-discipline which allowed her to listen not just to the claims of power but to those of responsibility, whether for her own dependents or for the broader needs of religion and scholarship.
Posted by Stephanie A. Mann at 12:30 AM

Email ThisBlogThis!Share to TwitterShare to FacebookShare to Pinterest
Labels: Leanda de Lisle, Margaret Beaufort, Philippa Gregory, St. John Fisher, The Princes in the Tower, The Wars of the Roses, The White Queen