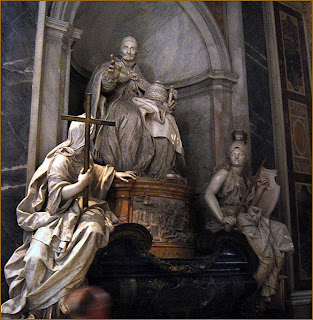 Blessed Pope Innocent XI died on August 12, 1689. His papacy is known for his efforts to reform and simplify life in the Vatican and throughout the Church. He was also an opponent of King Louis XIV's Gallicanism and absolutism. As the Catholic Encyclopedia tells it, that opposition spread to concerns about King James II's "autocratic" reign in England:

The whole pontificate of Innocent XI is marked by a continuous struggle with the absolutism of King Louis XIV of France. . . . All the efforts of Innocent XI to induce King Louis to respect the rights of the Church were useless. . . . Innocent XI did not approve the imprudent manner in which James II attempted to restore Catholicism in England. He also repeatedly expressed his displeasure at the support which James II gave to the autocratic King Louis XIV in his measures hostile to the Church. It is, therefore, not surprising that Innocent XI had little sympathy for the Catholic King of England, and that he did not assist him in his hour of trial. There is, however, no ground for the accusation that Innocent XI was informed of the designs which William of Orange had upon England, much less that he supported him in the overthrow of James II.

Of course, popes are not impeccable; they can err in political and strategic matters. Blessed Pope Innocent XI was either misinformed or unaware that James II was pursuing freedom of conscience in England through Parliamentary elections and that he had the backing of many other Christians and even William Penn, the Quaker.

In the north there were more problems. Catholic hopes had soared when King Charles II of Britain converted on his deathbed and was succeeded by his openly Catholic brother King James II. The Pope advised the new King of England, Scotland and Ireland to move slowly and carefully, knowing that the English had developed a paranoid fear of Catholics, before trying to restore religious freedom to Catholics and dissenting Protestants. However, James II was tied by blood and money to the King of France and he paid no attention to the warnings of Innocent XI. He went ahead with his program of religious freedom, British Protestants were terrified and James was promptly overthrown by a Protestant coup in concert with a Dutch invasion. The chance for a Catholic revival in Britain had been lost and Pope Innocent XI, whose opposition to Louis XIV had put him on the generally Protestant side of that conflict, died only the next year in June of 1689.

The image of Pope Innocent XI depends a great deal on who is painting the picture. Many British and French Catholics still have a little lingering dislike of him. In fact, more than 50 years after his death French cardinals still blocked efforts to canonize the pontiff in 1744. It was not until 1956 that the Pope was declared Blessed Innocent XI and a declaration on his sainthood seems unlikely. However, despite the considerable opposition he aroused, it was mostly due to his staunch defense of the independence of the Church. He was not a lavish pontiff and left the treasury in surprisingly good shape, he was sincerely and devoutly religious and committed to cleaning up the Church and defending Christianity. All in all, a great man.
Posted by Stephanie A. Mann at 12:30 AM