The temptation I write of, naturally, is books. The annual Midwest Catholic Family Conference always brings excellent speakers and presenters--but also, vendors with books, books, and more books--and many religious articles. (Colleges and universities come too, inviting parents and high school students to consider their higher education options, and offering promotional SWAG.) Alas, the St. John Fisher Bookstore no longer exists, but when it was among the vendors, it was hard to stay away: all the Neumann Press books (also, sadly defunct), all the Roman Catholic Books offerings, most of the Ignatius Press books, and most of the Scepter Publishers and Sophia Institute materials too.

I went hoping to find two books, both from the latter two publishers: Scepter's edition of St. Thomas More's Dialogue of Comfort and Tribulation, and Sophia's new edition of Blessed John Henry Newman's meditations, with an introduction by Bishop James T. Conley, formerly of the Wichita Diocese. I found the Newman, but the proprietor of the store that should have had the More told me he left all his More books in Cincinnati! But then I found this publisher, and this intriguing book: 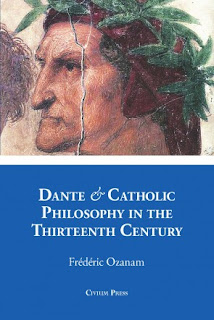 The work which produced this volume began when the author, only twenty years old at the time, found himself standing in the Camera della Segnatura before Raphael’s Disputa del Sacramento Among the adoring Church—popes, monks, scholars and pastors—one head stood out from all the rest, crowned not in miter or tiara, but with laurels. Why should the painter bestow such august honor on the poet exile?

This book is an attempt to answer that question. Unlike many who comment upon the poet’s work, Ozanam stresses the fidelity of Dante to the Catholic tradition and his filial devotion to the Church. Far from the revolutionary anti-Papal anarchis found in the passages of most commentaries, the portrait which Ozanam, following Raphael’s lead, paints is the visage of aman who has set his mind on higher things and his hands on the lower:


Here is a poet who appeared in a tumultuous age, who lived as if enveloped in storms. Yet, behind the moving shadows of life, he divined immutable realities. Led by reason and by faith, he outstrips time, penetrates into the invisible world, there takes possession and establishes himself as if in his native land—he who has no longer a country here below. From that lofty station, when his eyes fall upon human things, he is able to see at once the beginning and the end; consequently, he measures and judges them.

Frédéric Ozanam (1813–1853) was professor of History and Literature at the Sorbonne, writing extensively on the historical contributions of Christianity to society and culture. In 1833, he founded the Society of Saint Vincent de Paul. He was beatified by Pope John Paul II in 1997.

And, yes, I succumbed to the temptation! I also met Lisa Hendey and Dan Egan, both fellow Son Rise Morning Show regulars, and Patrick Coffin from Catholic Answers Live, and many friends!
Posted by Stephanie A. Mann at 12:30 AM